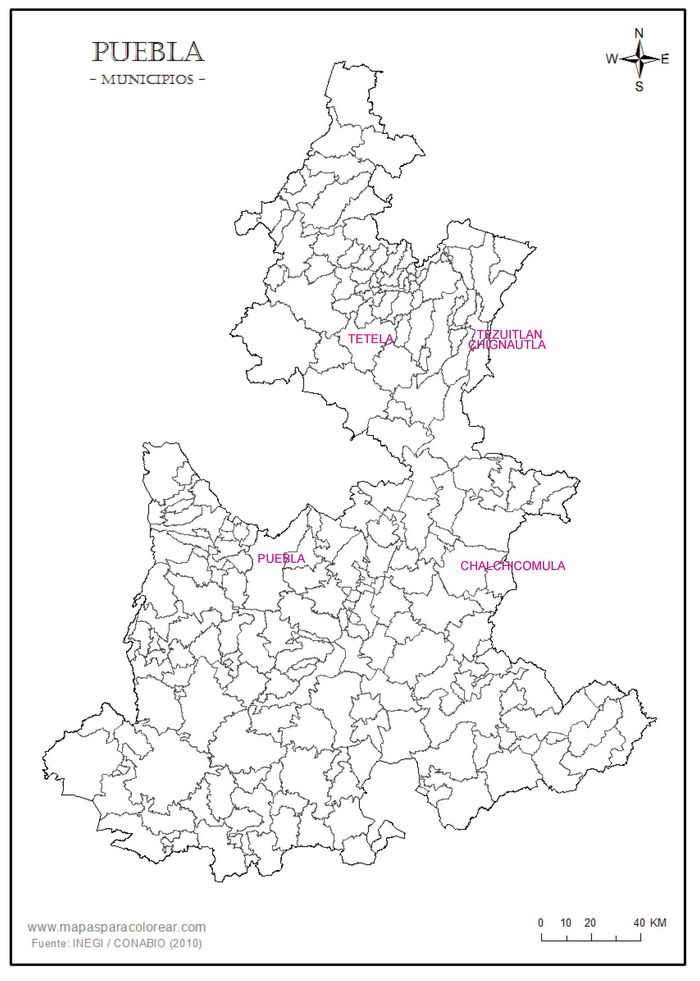 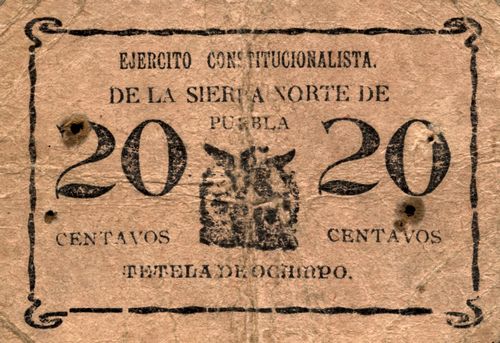 This primitive note from the Segunda División de Oriente of the Ejército Constitucionalista, dated 1 December 1914, has the same design on both sides.

General Antonio Medina Quintanilla was born in 1885 in Cruillas, Tamaulipas. A businessman, he joined the Constitutionalist army on 26 February 1913, as a Capitán primero, under the direct orders of Lucio Blanco. After taking part in numerous engagements he was named by Carranza Jefe de Operaciones de la Sierra Norte de Puebla, with the rank of General de Brigada, in command of the Brigada Serdán of the Tercera División de Oriente, with his headquarters in Teziutlán.

In late 1915 he served in a corps of the Ejército de Oriente, commanded by Pablo González, which operated throughout the Estado de México, Morelos, Hidalgo, Puebla, Tlaxcala and Guerrero. In 1917 in Puebla he fought against Higinio Aguilar, the Márquez brothers and other Felicistas. Until 1919 he fought against the forces of Manuel Peláez and Félix Díaz in Tamaulipas, Puebla and  Veracruz.

In 1922 he took up arms against Obregón, was captured and on 25 March shot at the hacienda Tres Palacios in Chalchicomula, Puebla.

These notes of the Brigada Serdán refer to a decree of 5 December 1914[text needed]. 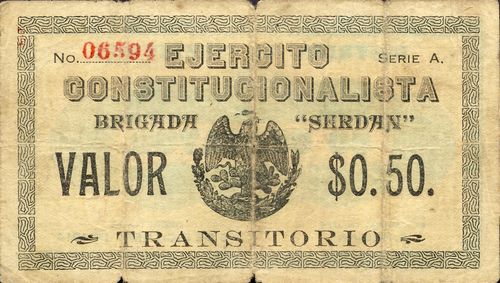 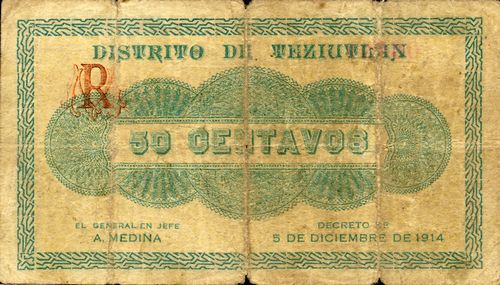 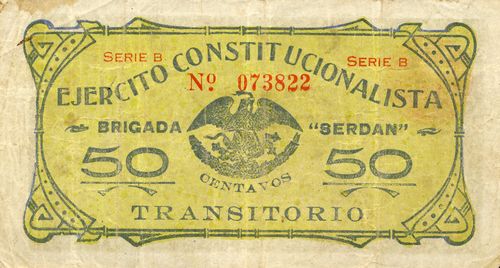 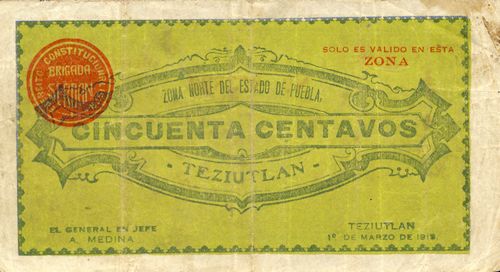 There is also this handwritten vale. 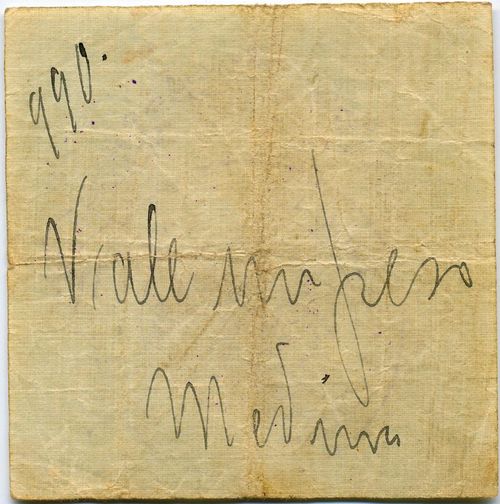 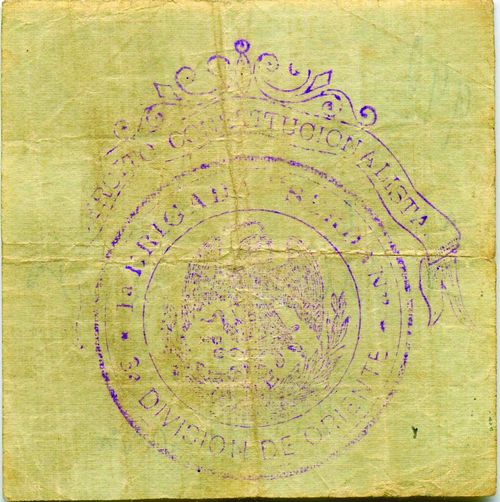 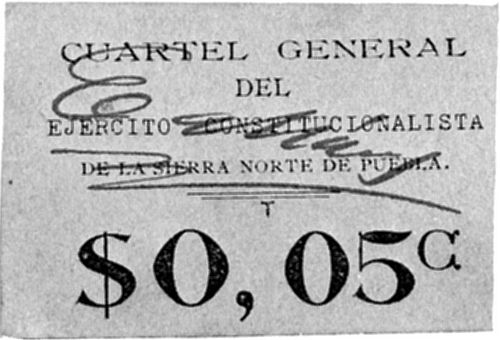 In the summer and autumn of 1915 Medina was financially in a good situation, having a partnership in a bank in Tezuitlán. It was said that he trafficked in confiscated property, returned haciendas to their owners for a price, speculated in scarce goods, printed paper money which had no backing, and collected the salaries of fictitious soldiers. Also, he permited his brother Federico to use his influence as a Constitucionalista general to promote financial operations in the region (the Sierra Norte de Puebla) and protect his friends. This group took advantage of the warfare and disorder doing business with the Márquez brothers (Convencionista generals) and operating with counterfeit moneyGuy P.C. Thomson and David G. LaFrance, El Liberalismo Popular Mexicano: Juan Francisco Lucas y la Sierra de Puebla, 1854-1917, 1999. Footnotes to the passage cited are (1) Secretario de Gobernación to governor, 2 October 1915; (2) Macario Hernández to Carranza, 7 October 1916; (3) un hijo del pueblo to González, 28 May 1915; (4) various comerciantes to González, 5 June 1915 and (5) El Universal, 11 June 1917 (information from Kim Rud).

On 2 March 1915 an unnamed correspondent wrote to Teniente Coronel Rubén Morales at the Hotel Diligencias, Veracruz, about an issue of vales al portador that general Carlos Tejada, who was forming the Brigada “Venustiano Carranza”, had made in Tehuacán. These were of six denominations (5c, 10c, 25c, 50c, 75c centavos, and $1[images needed]) and in a meeting summoned by the Jefatura de Armas businesses had been told that they were to be of forced circulation. People to whom the correspondent had spoken thought that the issue was illegal and would greatly harm their causeprivate collection. None are known.

A series of cartones from Puebla dated June 1915 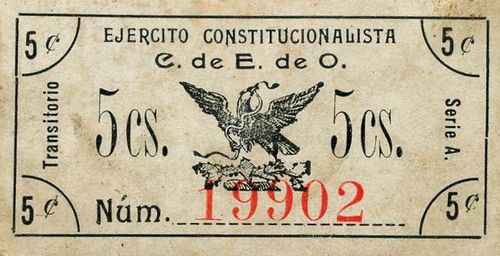 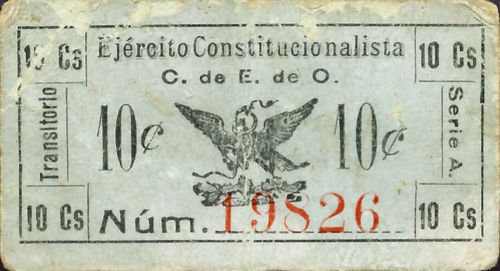 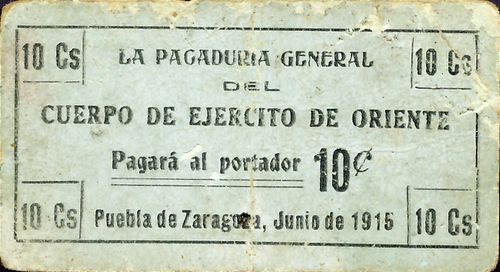 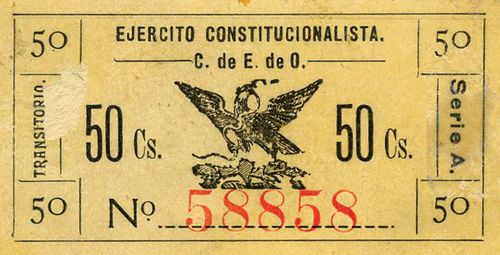 On 1 July Pablo González, in Tepexpam, Estado de México, wrote to José D. Ortiz, in Puebla, approving the proofs for the 5c, 10, 20c and 50c notes that the latter had sent on 23 June and saying that he had told the governor to agree to their printingAPGonzález, leg. 8, exp. 43) (roll 17) so was there also a 20c note?

Chignautla is a town in the north of the state.

We know of 1c and 2c notes from the Sub Comandancia Militar with the printed name of the Tesorero, A. Marín. Were these Constitucionalista? 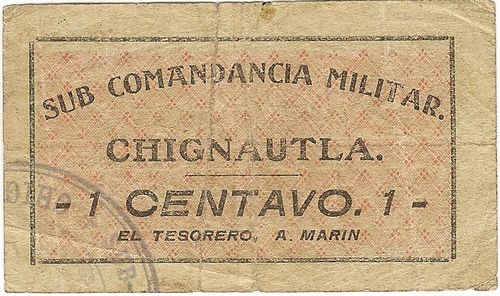 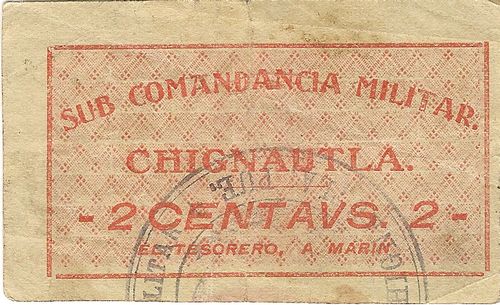