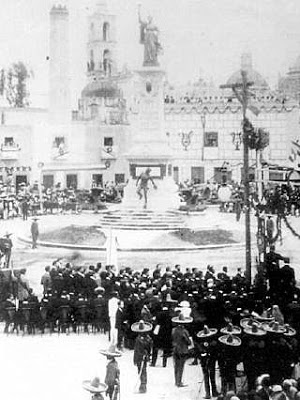 On 24 April 1907 a Comisión Nacional del Centenario de la Independencia was formed to organise the celebrations for the centenary of Mexico’s Independence. Once the national Comisión was established, the members nominated delegates to set up statewide and municipal commissions in the individual states. The delegate from Querétaro was Carlos M. Loyola, who summoned a meeting at which the following appointments were made:

In August 1907 after considering various suggestions the Comisión Central decided to commemorate the centenary by erecting a statue of Josefa Ortiz de Domínguez, “la Corregidora”, at a cost of around $40,000. On 15 September 1908 they held a pageant in the Gran Teatro Iturbide, where they chose the architect and set about raising funds.

This note, dated a few days later, must be one of the first efforts to raise donations.

As such it is not paper money but with its appealing title ‘El Banco del Centenario’ deserves mention. It has the names of Carlos María Loyola as Presidente and Isauro Gutiérrez as Cajero.