A small group of low-value notes bears testimony to a period in Mexico’s history when it was confronted by a shortage of coins and the consequent effect on daily business.  The United States passed its American Silver Purchase Act on 19 June 1934: this caused to price of silver to increase and as a result, in Mexico, silver coins began to be hoarded to be remelted at a profit.

On 25 April 1935 the Mexican government reacted with a series of reforms, changing the fineness of its coinage, and withdrawing silver coins from circulation.  It had ordered 50c coins (tostones) and $1 Banco de México notes from the United States but until these arrived the sudden shortage of small change led many commercial organisations, particularly Chambers of Commerce, to agree with the local banks to issue scrip in the form of bearer cheques (cheques al portador).

Though there were mutterings that these breached the legislation on paper currency, the Secretaría de Hacienda y Crédito Público was generally acquiescent.  The cheques were of low denominations, backed by deposits in the banks, of voluntary (but general) acceptance and redeemable on demand (occasionally stated as in multiples of five pesos, the lowest value banknote).

When the crisis passed most of these cheques were redeemed (out of $10,000 issued by the Uníon Nacional de Industria y Comercio in Guadalajara only $18 was not handed in) and so survivors are extremely rare.  Indeed, though the shortage was nationwide we have examples from just ten cities and mention of a few others.  A few others will no doubt emerge over time but to expand our knowledge we should rely on newspapers and other such sources.  Mexico had a vibrant local press at this time but access is patchy.

In Querétaro on 5 May the Cámara Nacional de Comercio issued $1 and $2 cheques, drawn on Luis Escobar y Cia, local correspondent of the Banco de México, and signed by vice-president Antonio Espinosa and secretary E. A. Martínez y M. 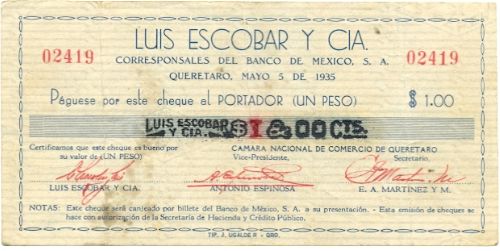 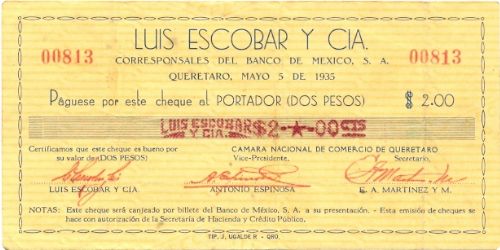