However, by early 1915 the shortage had become acute enough that on 9 April the Secretario General wrote to the president of the Cámara de Comercio that the governor had decided that the Querétaro town council should study the best way of making a provisional issue of fractional currency that would be accepted by local businesses. The amount issued should be fully guaranteed by a deposit in the Tesorería MunicipalAQ, Fondo Poder Ejecutivo Sec 2ª Hacienda C-1 Año 1915 Exp. 170.

During May, June and part of July 1915 the state, and in particular the capital, of Querétaro was frequently cut off from Carranza in Veracruz. Therefore, on 12 June the government authorized local business to issue a series of notes, guaranteed by a fund deposited by the selfsame businesses in the Tesorería Municipal.

These notes were valid only for commercial transactions in Querétaro.

These were signed by the Presidente of the Cámara de Comercio, Robert Nieto, or an understudy, such as the 1o Vocal, [     ] Ramírez[identification needed], 2o Vocal, J. Ugarte, and F.{?} Zubieta. 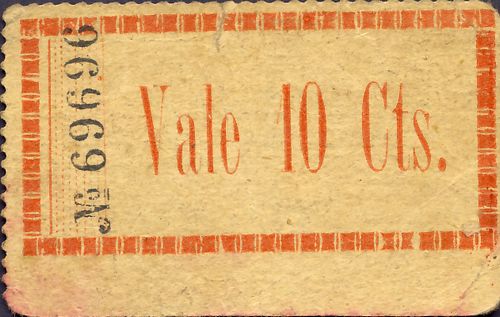 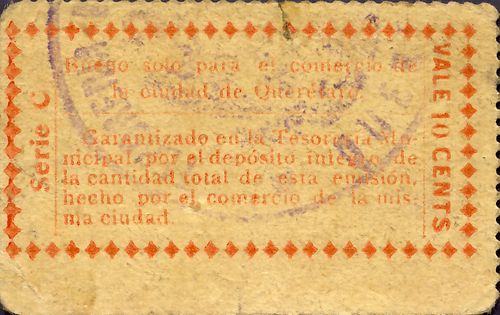 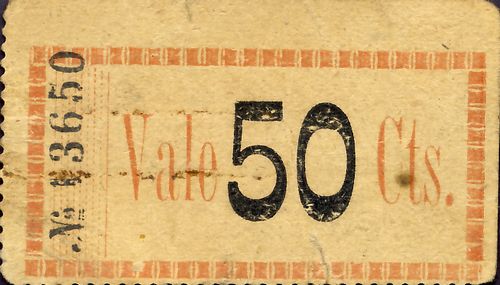 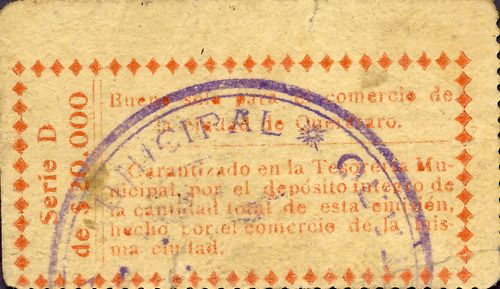 On 10 July 1915 at an extraordinary sesión of the town council (Ayuntamiento) the members discussed a request from General Canuto Reyes for a loan of $100,000 for the costs of his flying column, and, considering the state of the municipal finances, decided to ask Reyes to leave some funds in the Tesorería for their own needs. They were told that there were just over $60,000 that businesses had deposited to guarantee the cartones in circulation: the amount of municipal funds was unknown as the Tesorero still had not produced a balance sheet. Benjamín Herrera said that the council could not use the $60,000 plus without the permission of the Cámara del Comercio, so they summoned its representativesJosé Aguirre, Presidente José García, Vicepresidente, Jesus Coello, Tesorero; Reginaldo Herrera, 2o Vocal, Herminio Camacho, 3er Vocal and Ramon del Villar, 3er Vocal suplente. Ramón García, the Secretario, was already present as a member of the town council and asked for their approval. The Cámara’s president stated that his organization did not represent all the businesses that had made deposits, and others said that they could not agree, but it was pointed out that the notes themselves said that they were guaranteed by the Cámara and finally it was decided to accede to General Reyes’ request, using the money that guaranteed the issueAMQ, actas de Cabildo, exp. 75, 10 de julio de 1915, f.95. So Reyes made off with the funds and to add insult to injury when the Carrancistas returned they fined everyone who contributed in good or bad faith to helping the Villistas (que contribuyeron con buena o mala voluntad a sostener a las fuerzas villistas)AMQ, actas de Cabildo,exp. 75, 14 de octubre de 1915, fs. 128v..

In August 1915, given the lack of funds, the government issued $200,000 in 50c notes, to ease small transactions and to pay for sanitation works. These were Serie F. 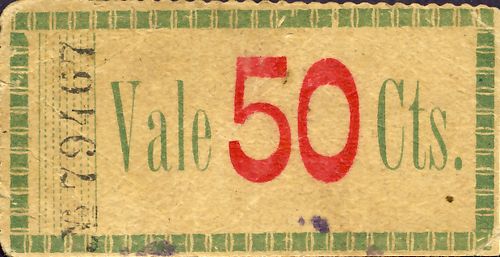 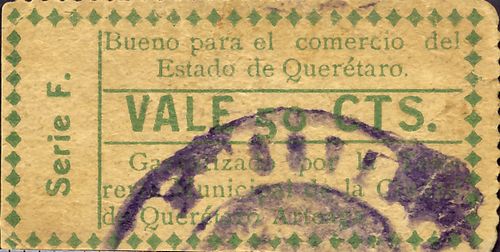 Of this $200,000 $88,000 was spent on drainage while the remaining $112,000 was distributed to businesses and individuals in exchange for notes of the national issues. Over time the Secretario General made several consignments of these 50c vales to the Tesorero General thusAQ, Fondo Poder Ejecutivo Sec 2ª Hacienda C-2 Año 1915 Exp. 212:

On 10 October Ramón García, the Cámara’s secretary, wrote that various members had their entire holdings tied up in these 50c vales and were suffering because of counterfeits and the fact that the notes were not accepted outside of the capitalAQ, Fondo Poder Ejecutivo Sec 2ª Hacienda C-2 Año 1915 Exp. 223 letter A. M. Camacho, presidente municipal, to Secretario General, 10 October 1915. On 30 November the Secretario General wrote to all the Presidentes Municipales of the Districts and Municipalities that the 50c Series F vales were of forced circulation throughout the stateAQ, Fondo Poder Ejecutivo Sec 2ª Hacienda C-3 Año 1915 Exp. 327, acknowledged by Enrique Aguda, president municipal of Jalpán on 3 December. On 17 December 1915 on instructions from the state government the Tesorería Municipal handed $7,027.91 in cartones to Teniente Coronel Jorge Cabrera, jefe of the 84o Regimiento. Cabrera was to return the amount in notes of legal tenderAQ, Fondo Poder Ejecutivo Sec 2ª Hacienda C-4 Año 1915 Exp. 279.

On 30 April Zubieta reported the following held in the Tesoreria MunicipalAQ, Fondo Poder Ejecutivo Sec 2ª Hacienda C-2 Año 1916 Exp. 520. Some errors corrected. Zubieta was also holding $21,150 in 50c vales and $51 in counterfeit 50c vales for Srita Ana Nieto, the result of the sale of grain belonging to Leopoldo Ruiz Ocejo during September and October:

By May 1916 Carranza was imposing his national currency, with the infalsificables to be the only currency from 30 June. The government envisaged problems in redeeming these existing cartones in the new infalsificables, or disputes over the going rate if they were redeemed with the old Carrancista currency, so on 16 May Federico Montes, the military commander and governor, ordered the decommissioning of these vales. From 22 May until 10 June they were to be exchanged in the offices of the Municipal Treasury for notes of the Ejército Constitucionalista and Veracruz Gobierno Provisional de México issues. After 10 June the cartones would be declared null and void.

In the redemption Series A to E were covered by the $64,511.50 deposited by businesses and the bulk of Series F in a similar manner. The remaining $88,000 was met from the government’s own funds.

On the first two days (22 and 23 May) more than $50,000 was handed inAQ, Fondo Poder Ejecutivo Sec 2ª Hacienda C-4 Año 1916 Exp. 515 and by 2 June $71,500 had been changed and $11,173.60 had been deposited in the Tesorería Municipal awaiting exchangeAQ, Fondo Poder Ejecutivo Sec 2ª Hacienda C-4 Año 1916 Exp. 515 report pf F. Zubieta, 2 June 1916. On the same day the governor warned the presidentes municipales of Querétaro, San Juan del Río, Amealco, Cadereyta, Tequisquiapan and Toliman that they should remit their notes before 10 June or they would not be changed. Jalpan was also telephoned but replied that so far nothing had been deposited. The governor sent another reminder on 6 June and Tolimán replied that its presidente municipal had set out with its notesAQ, Fondo Poder Ejecutivo Sec 2ª Hacienda C-4 Año 1916 Exp. 515.

Later, in the monthly cashflows produced by the Tesorería Municipal, there are occasional references to these vales; thus: