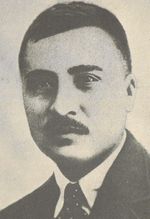 Angel Flores joined the Constitutionalist Army in 1913 and the following year was leading General Ramón Iturbide’s troops in the Mazatlán military campaign. Thereafter he served in the sixth Battalion in General Obregón’s Cuerpo de Ejército del Noroeste against the armies of Villa and Maytorena. In January 1915 Flores’ troops took the city of Navojoa and held it against Villa and Maytorena’s attacks in a siege that lasted for months. In November 1915 General Dieguéz ordered General Flores’ troops to defend the city of Hermosillo, Sonora and he was able to defeat the enemy troops under General Villa´s personal command.

Carranza appointed Flores Provisional Governor of Sinaloa from 1 May 1916. As such he authorized the issue of a pair of notes ($1 Series A, $2 Series B).

These notes carry a stamped seal of the Secretary of the Free and Sovereign State of Sinaloa and text that declares that they are issued for local circulation only in the state of Sinaloa and guaranteed by a total of $100,000 of infalsificable notes deposited at the commercial premises of Manuel Vila Fontán, where they will be exchanged for notes of the new issue as soon as they are received. In addition to Flores’ signatures they carry those of Vega Lamarque and T. L. Mayo(?).

The infalsificable (incapable of being counterfeited) issue was part of Carranza’s attempt to reform Mexico’s monetary policy. On 21 July 1915 he decreed a new national issue of 250 million pesos to be printed by the American Bank Note Company of New York. The new notes began to enter circulation in May 1916, and gradually replaced the other Constitutionalist issues.

Flores was forced to make a second issue of both denominations in August 1916, with the only difference new series letters ($1 Series C, $2 Series ) and the legend on the reverse which now read that they would be redeemed on presentation and the date, 15 August.

Some of these notes were withdrawn and burnt by the Tesorería General in October 1916.

In 1920 Flores joined in the Aqua Prieta revolt that brought down the government of Carranza, and was rewarded with the governorship of Sinaloa from 1920 till 1924. He opposed General Plutarco Elias Calles in the presidential elections but Calles won and Flores withdrew from the politics in 1925. He was suspiciously poisoned by arsenic and died in 1926 at Culiacán, Sinaloa.