On 20 November 1914 General Riveros declared himself a Villista and left Culiacán to establish his government in San Blas.

Riveros’ first currency decree, núm. 3, on 13 July 1913, had authorised a provisional issue of currency until the state passed a law creating a definitive issue. A month later, Riveros’ decree núm. 8 proposed a new issue of $1,000,000 to replace the original notes, which would be more banknote-like in appearance and carry a portrait of Francisco Madero. However, Riveros then had other more pressing problems.

Finally, in January 1915 Riveros wrote to the American Bank Note Company, New York for a quote to replace his provisional issues with a definitive issue (as Maytorena was doing in Sonora). The ABNC replied with quotations for 1,225,000 notes in five lower denominations and 87,000 notes in three higher denominations, but no other correspondence is on fileABNC, . On 22 February 1915, in decree núm. 1, Riveros had revised the quantities:

The signatures of the governor, Riveros, and Secretario General, José G. Heredia, were to appear in facsimile on all values and the signatures of the Tesorero General, Matías Ayala, and Interventor, Ignacio Bermúdez, in facsimile on the three lower values and handwritten on the $5  to $100 (in fact when Riveros finally got his notes printed by a different U.S, company, they were printed in error on the three higher values).

The face had the images of Benito Juárez and Francisco Madero, and the reverse an allegory of Justice and Liberty, crowned by the national seal with a view of Culiacán on the left and of Mazatlán on the right. A million pesos of this issue were to be used to redeem the provisional notes of decrees 3, 11, 14 and 17.

Riveros had these notes printed by Britton & Rey, a well-established lithography firm located in San Francisco, California, probably because of cost and a quicker delivery though Britton & Rey had produced a prodigious body of early California town views and so were well-suited to engrave panoramas of Culiacán and Mazatlán. The contracts were placed on 30 January and 1 February 1915. The $5 and $10 notes were printed first (with the Tesorero and Interventor signatures blank); the low values next, and the high values last. These $20, $50 and $100 notes were shipped on 3 July 1915letter Britton & Rey to Riveros, Culiacán, 2 July 1915 but as the printers had mistakenly printed them with four facsimile signatures they were not acceptedletter Riveros to Britton and Rey, 29 July 1915 (lot 26420. Heritage Auctions, 7 January 1915).

We can presume that note with a 'TESORERIA GENERAL DEL ESTADO - SINALOA' stamp on the reverse or (for higher values) two additional hand signatures were issued (or intended to be issued) whilst the rest were remaindered. So the $20, $50 and $100 values were not issued because they were wrongly printed.

For notes with a typewritten or handwritten legend on back, or a Brigada Juárez resello, see Luis Herrera.

Because of the pressing need for more 5c and 10c notes on 15 April Riveros also authorised an issue of $40,000 of the former and $60,000 of the latter, both serie A. Again, the decree specified the design of the notes. They were to be of forced acceptance up to $10 in a single payment. 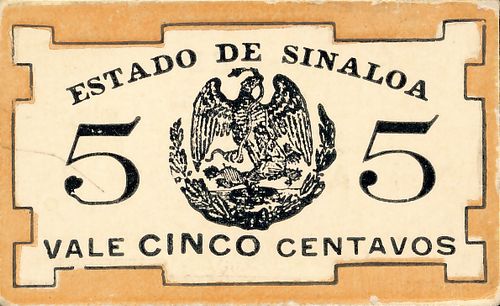 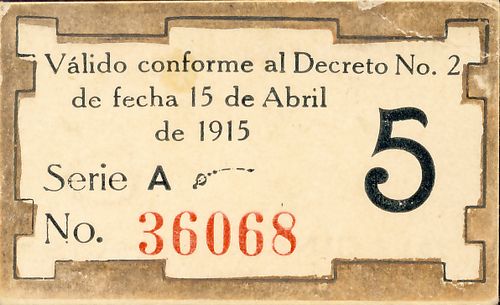 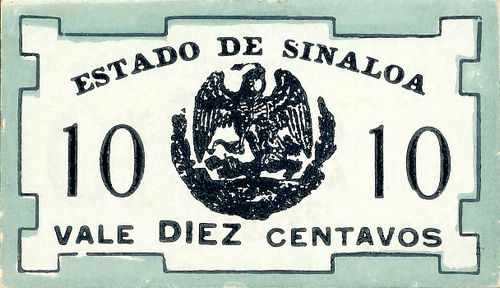 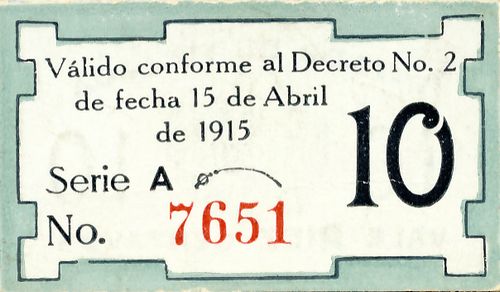