Benito Juárez's government, in a circular of 24 July 1862[text needed], demanded a contribution towards the costs of the Ejército de Oriente which was opposing the French intervention. In San Luis Potosí, the military commander of the state, General Jesús González Ortega, in a decree of 6 August 1862 [                    ][text needed].

Therefore, to meet his state's obligation, on 17 December 1862 the governor of San Luis Potosí, Sóstenes Escandón Sóstenes Escandón Martínez was born in the hacienda of Diego Ruiz of the mission of Pastora de Rioverde and was baptized on 4 April 1819. He married Flora Pando, daughter of a rich Spaniard, José de Pando, the owner of the hacienda of San Rafael, between San Ciro and Lagunillas. From a very young age he dedicated himself to trade managing to make a regular fortune. In 1853 he was president of the Ayuntamiento of Rioverde and in 1856 affiliated with the Liberal party. He was elected governor of the state on 14 October 1960, a position he held until 3 January 1862 when, because of the state of siege, he was replaced by the comandante militar, Jesús González Ortega, and then resumed when the state of siege ended. He returned to be governor of the state from 15 December 1869 to 2 August 1870. He retired to Rioverde, San Luis Potosí, where he died on 3 October 1876, of cirrhosis. authorised the issue of $10,000 in $1 bonds.

So far, it appears that these were merely the record of a forced loan and, as such, not paper money. They were finally redeemed, as indicated by the endorsement on the example below, which states that it was registered (Registrado á fojas 7 del libre respectivo para ser convertido) on 6 October 1889. However, one wonders why the state resorted to the printing of 10,000 individual pieces of paper unless it envisaged them being negotiable in some way. 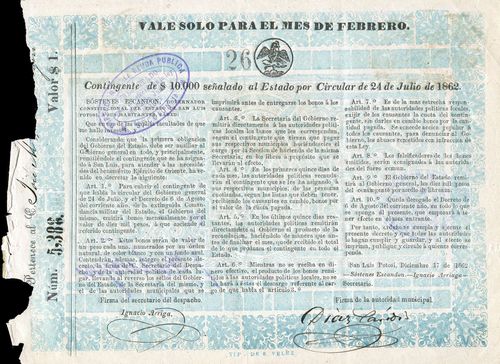 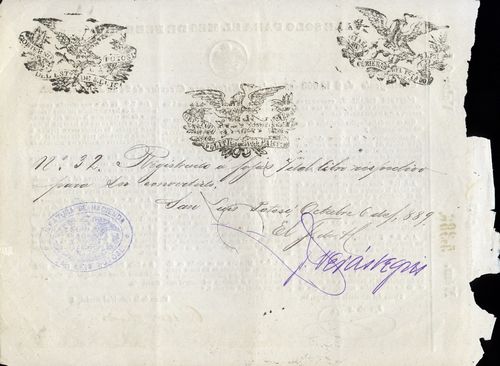 The bonds carry the signature of Ignacio Arri(a)ga, the Secretario del Despacho, and that of the representative of the municipal authority to which the bond was assigned.