On 18 September 1897 a concession to establish a bank was granted to Prospero Sandoval, Baudelio SalazarBaudelio Salazar was an assayer (ensayador) in 1879 (El Siglo Diez y Nueve, 16 July 1879) and had moved to Chihuahua by 1894. He was a deputy in the Chihuahua legislature in September 1895 and setting up a mining exchange (bolsa de minería) in Chihuahua in 1896(Semana Mercantil, 6 January 1896) (an American) and Luis A. MartínezLa Constitución, 1 October 1897. The consequent contract was agreed between the bank’s board (the three concessionaires plus Juan de Dios Castro, as vice-president) and the state executive on 6 December and approved by the state legislature on 15 DecemberLey núm. 10. (La Constitución, 25 December 1897) and the bank finally opened its doors on 10 January 1898. 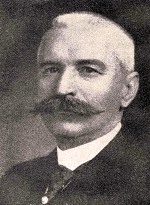 Ramón Corral Verdugo was born of an undistinguished family on the Hacienda de las Mercedes, Alamos in 1854. Corral earned his reputation and multiplied his wealth through business and mining. Thus he was not a hacendado but a speculator in the world of finance as well as an efficient administrator and able politician, who began his political career by joining the rebellion against Governor Ignacio Pesqueira, was elected to Congress in 1877, and eventually became president of the Chamber of Deputies. Shortly afterwards he returned to Sonora as lieutenant governor, then became its governor, and from that office went on to be mayor of the Federal District, vice-president of the Republic, and minister of Gobernación, the key cabinet post, in 1904 and 1910.

Corral held 10% of the bank’s shares. As under the bank’s concession no official or employee of the executive branch could serve on its board Corral was never a director though his daughter’s portrait graced the bank’s notes.

Manuel Mascareñas Porras was born in Durango in 1848, came to Sonora in 1869 and set up a business in Guaymas. In 1873 he married Luisa Navarro Montijo, daughter of Cayetano Navarro. He spent most of the 1870s in the port, where he dabbled in commerce and politics. He served several terms on the Guaymas council. He later moved to Hermosillo, where he formed a partnership with Rafael Ruíz and opened a small retail business. Mascareñas continued to take part in politics, being elected several times to the Hermosillo council. In 1880 President Díaz established the customs post at Nogales: Mascareñas realised the possibilities and in 1885 moved his business to that town. He purchased the hacienda Santa Barbara which consisted of more than 15,000 hectares. By 1900, after acquiring adjacent lands, he had amassed more than 36,000 hectares.

At first Mascareñas focused his attention on cattle ranching, importing American Herefords to breed with Mexican cattle. In a few years he had one of the most productive and profitable cattle enterprises in the north, exporting large amounts of beef to the United States by rail. The ranch also produced wheat, corn, and other agricultural staples. It was not long before Mascareñas became involved in Nogales politics. By 1887 he had been elected Presidente Municipal of Nogales, later becoming the Mexican consul in Nogales, Arizona, and serving in that capacity until the outbreak of the Mexican Revolution. 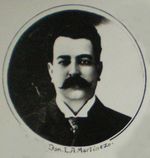 Luis A. Martínez was the first and most genuine of the Sonoran capitalists: starting with nothing, he managed to build up a large number of undertakings whilst also devoting himself to politics. He came to Guaymas in 1886, began as an employee of the port authority, and established his own casa comercial near the quay in 1892. He was one of the main shareholders in the Compañía de Transportes Marítimos of Mazatlán, for which he was the Guaymas agent. This merged with its competitor, the Línea de Navegación del Pacífico, to form the Compañía Naviera del Pacífico, and Martínez retained his shareholding and agency. By the first decade of the century the Compañía Naviera del Pacifico was the largest in MexicoJorge Murillo Chisem, Apuntes para la Historia de Guaymas, Sonora, 1990. Martínez was also a founding shareholder of the Compañía Industrial y Explotadora de Maderas, the largest diversified machine shop on the West Coast and, as well as the Banco de Sonora, a founding shareholder in the Banco Hipotecario y Agrícola del Pacífico.

P. Sandoval and Co. commenced business in 1884 and were the oldest established customs brokers in Nogales. They had their own commercial business as well as being commission merchants and customs agents for many commercial houses and a number of the leading mines in Sonora and a banking house for payments to mining companies in the districts of Altar, Magdalena and Arizpe. The firm consisted of Próspero and Aurelio Sandoval, sons of José V. Sandoval, who had been Presidente Municipal of Guaymas in 1856. Próspero was the collector of stamp tax, whilst Aurelio had the agency for the Ministry of Public Works. They also owned large tracts of land in and around Nogales.

Augustus Abbott was an American with experience in banking, having been manager of the California State Bank at SacramentoSacramento Daily Union, 19 March 1898 and part-owner and manager of the rich Santa Rosalia mine in Arizpe, Sonora. Abbott and his California friends subscribed for about two-fifths of the bank’s stock and he assisted in its organization but, according to an interview in August 1897, did not intend to take any further part in its managementThe Oasis, Nogales, 14 August 1897.

The proofs for the bank’s notes were approved in February and March 1898The proofs of the $5 were approved by Juan de Dios Castro, on 7 February; those of the $10 were approved by R Ruiz, on 21 February, and those of the $20, $50, $100 by Max Müller, on 18 March (ABNC) and the notes themselves began to circulate in March. The notes were printed by the American Bank Note Company and bore the portrait of Ramón Corral’s daughter, Hortencia Corral Velez, though whatever this adds in uniformity to the series it detracts from each note. Only the hundred pesos note, with its sailing ships, possibly an allusion to Luis Martínez and the importance of Guaymas, is particularly memorable.

On 16 August 1898 the Customs Administrator at Nogales, Carlos G. Mertens, wrote to the Minister of Finance, José Yves Limantour, that he had just learnt that people (led by Sandoval) were denigrating him with governor Corral because he was not accepting the Banco de Sonora’s notes. Mertens said that it would be much easier for him to accept banknotes than silver, and he had no interest which bank they came from, but 54% of his receipts were paid into the agent of the Banco Nacional de México, which only accepted their notes and those of the Banco de Londres y México, whilst some were paid to the Administrador del Timbre, who also would not accept Banco de Sonora notes. The Banco de Sonora had tried to flood the local market with its notes, to drive out the others, but whilst the Banco Nacional de México and Administración del Timbre refused to accept them, there was nothing he could doCEHM, Colección José Y. Limantour, carpeta 35, legajo 9189. On 24 August Limantour replied that this conduct accorded with the government’s agreement with the Banco Nacional de México, and that the Banco de Sonora would undoubtedly be satisfied with the explanationCEHM, Colección José Y. Limantour, carpeta 35, legajo 9190.