Other people connected with the bank included the following. In all enough of them (Ainslie, Bley, Müller, and many of the employees) were Germans for the bank to be considered German-ownedOsco Castañeda Dahes, La Revolución Mexicana, Mexico, 1989.

Victor Aguilar: He was elected comisario at the first shareholders' meeting in November 1897Dos Republicas, California, 6 November 1897 and was a director in [ ]

Henry Bartning: He was manager of the Nogales branch for several years, then moved to the Alamos and finally the Culiacán branchThe Oasis, 21 March 1914.

Ricardo Cubillas: He was the bank’s assistant auditor in [ ].

Juan C. Dorbecker: He covered as interventor in July 1900.

Felix Epler Farrell: He was born in Jacksonville, Illinois on 28 October 1868. After a spell at the First National Bank of Jacksonville he went to Ciudad Juárez, where, in 1893, he established the private banking firm of Farrell & Müller. In December 1897 the owners sold their interests to the Banco Minero and Farrell moved to Hermosillo, where he assisted in the establishment of the Banco de Sonora. In the spring of 1898 he disposed of his interests and returned to Jacksonville to become Assistant Cashier of the First National. 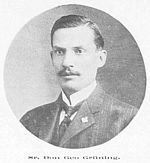 George Grünig: Born in Darmstadt, Germany, in 1869 he came to Sonora in 1896 and established the brewery Cervecería de Sonora. He married Dolores Monteverde, the daughter of Pedro Monteverdeinformation courtesy of Nicholas Juliano. Pedro Monteverde married Juliana Uruchurtu and had two daughters, Amelia and Dolores. Dolores (born 1 January 1874, died San Francisco 27 October 1914) married George Grünig. He was on the board of directors by February 1908.

John (Juan) Ashton Heap: Heap, who also served as the British consul in Guaymas, was the manager at Guaymas from [ ] until early 1912 when he resigned in order to devote more time to other business affairsTucson Daily Citizen, 24 July 1912. Photograph courtesy of Alexander Heap. By June 1914 Heap was vice president of the Blochman Commercial and Savings bank of San Diego, and travelling in Sonora on behalf of the bankTucson Daily Citizen, 3 June 1914. The Blochman bank specialized in handling Mexican exchange, and did business with both Huerta (in June 1914 transferring 100,000 pesos from Mexico City to Federal troops at Ensenada) and the Constitutionalists..

J. M. Hernández: He signed the bank’s balance sheets as acting accountant (contador) in May 1908 and acting cashier (cajero) in August and September 1910 and as contador in October 1910.

F. Lopez del Castillo: He was a director in [ ] 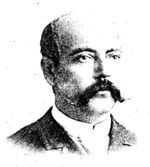 Alberto Mascareñas Navarro: The son of Manuel Macareñas, he was born in Guaymas in 1876. He began his banking career with the Banco de Sonora as subgerente in its Chihuahua branch and then managed its Nogales branch. He was cashier of the Banco Hipotecario y Agricola del Pacifico at Hermosillo, and then in 1913 set himself up in business in NogalesThe Oasis, 15 February 1913. He entered the diplomatic corps in 1918 as Mexican Consul General in San Francisco, then moved to Havana, London and Liverpool, ending up as Consul General in New York. In December 1924 he was recalled to Mexico by President Calles to be Subsecretario de Hacienda, under Finance Minister Alberto J. Pani. As manager of the Comisión Monetaria, he was active in the founding of the Banco de México on 1 September 1925, and served as its first managing director. After leaving the bank in 1938 he was a minister plenipotentiary in London, and died in Mexico City in 1944.

Luis A. Martínez: He was vice-president in 1913, when the bank’s directors were based in Los Angeles.

Rudolf E. H. Petersen: He was born in Lübeck, Germany on 9 March 1889 and was married to Eva Grünig, the daughter of George Grünig. He occasionally acted as contador in 1911 and 1912 and was manager of the Hermosillo branch in 1913. In June 1917 he was clerk for the Sonora Bank & Trust Company in Nogales, Arizona and interned as an alien enemyinformation courtesy of Nicholas Juliano. George Grünig married Dolores Monteverde, the daughter of Pedro Monteverde, and had three children, Eva, Amelia and George. Eva married Petersen.

Lauro Quiróz: He was the bank’s assistant auditor in [ ].

Carlos Rivera: He was manager of the Nogales branch in 1912Polk's Arizona Pictorial Gazetteer And Business Directory, 1912 and continued as manager and cashier of the Sonora Bank & Trust CompanyTucson Daily Citizen, 23 May 1914.

Harry J. Smith: Formerly of El Paso, he was contador in 1900 until at least 1912 and represented the bank’s interests in Hermosillo in 1915.

W. C. Winegar: in February 1902 Winegar was teller for the newly established Banco de CananeaTucson Daily Citizen, 28 February 1902 and by 1904 was working for the First National Bank of Douglas, in charge of their Mexican interestBisbee Daily Review, 2 September 1904. He became manager of the Chihuahua branch on 17 August 1906El Correo de Sonora, 17 August 1906. In October 1913 Silvestre Terrazas recommended Winegar to Villa, mentioning that he was almost the only banker in the city who had supported their cause and saying that he might need protection if the others tried to take revenge when they saw they had lostST papers, Part I, box 83, 19 October 1913. At the outbreak of the revolution Winegar moved to El Paso, worked as manager of the Sonora Bank & Trust Company, and then took up residence in Los Angeles. In April 1935 he was manager of the Banco Nacional in Ciudad Juárez.