Various business houses in Sonora offered banking facilities and could issue and cash drafts for anywhere in Mexico or abroadFrom 1842 the casas comerciales Hass-Denhausen and Uhde y Pini in Mazatlán, Sinaloa had also provided lines of credit and loans to businesses in Guaymas and Hermosillo (Gustavo Aguilar Aguilar and Wilfrido Ibarra Escobar, El Origen de la Banco en Sinaloa, 1998). In 1882 an American traveller reported: "There are no banks either in Guaymas or in the State of Sonora ; and business is carried on with foreigners by ordinary bills of credit, and by drafts on San Francisco, London, Hamburg, and Paris banks. The principal business firms are Aguilar & Co., Sandoval & Bulle, Domingo Carrez, G. B. Fourcade, W. Iberri, Arvillez & Co., J. J. Rodgers, Luis Jarequi, Ramon Carrizosa, Agnayo Bros., Echiquyen & Escobos, and some others, who do a large wholesale as well as retail trade. An agency of Wells Fargo is the only American institution finding a foothold in Sonora"Le Cenci Hamilton, Leonidas, Border States of Mexico, 1882. In 1885 an American, Frank O’Brien, killed his fellow traveller Mathias W. Calkins for a banknote (billete de banco) for $1,500 drawn on the Exchange Bank, New York and then attempted to cash it at ‘La Novedad’, the Wells Fargo agency in Guaymas. O’Brien was caught and executed. La Constitución, 5 August 1887.

Born in Alamos, Ruíz commenced his business career in Guaymas and in 1880 established ‘La Fama’ in Hermosillo. "The stock carried includes everything in the line of imported and domestic dry goods, fancy goods, ladies’ and gents’ furnishings, hats, shoes, jewellery, light and heavy hardware, as well as all class of foreign and native goods. A general banking and commission business is also transacted, drafts and exchange being issued on Mexico, San Francisco and New York, and is agent for the Banco Nacional de México"J. R. Southworth, El Estado de Sonora. Sus Industrias, Comerciales, Mineras y Manufactureras, Nogales, Arizona, 1897.

G. Möller and Co., Sucesores was one of the oldest and most progressive firms in Guaymas, established by Gustavo Möller in 1877 and on his death carried on by Enrique von Guendell, Carlos Busjaeger and Agustín Freese. It sold general merchandise, both at wholesale and retail, and ran a very extensive banking business, issuing drafts and exchanges on New York, San Francisco and Mexico City, and making collections for merchants in Mexico and the United States.

F. A. Aguilar, Sucesores was the oldest established house in Guaymas, founded in 1849 by F. A. Aguilar, with its name changed in 1876. The principal members of the firm were Agustin Bustamente and Cayetano L. Yñigo and their wholesale and retail departments and warehouse covered a whole block. They operated an extensive banking business as agents for the Banco Nacional and the Banco de Londres, issuing drafts and exchanges on all parts of Mexico, New York and San Francisco, and arranging for collections. In 1899 the Moctezuma Copper Company was drawing its paycheques on this firm. A Mr. Montijo managed the banking department.

Agustin Bustamente was also the general manager of the Compañía Industrial y Explotadora de Maderas and had extensive property and mining interests throughout Sonora.

W. Iberri e Hijos, Sucesores was founded in 1868 by Wenceslao Iberri and later run by his sons, I. M. and G. A. Iberri. ‘The cash and accounts department was separated from the sales department by a wooden partition with glass panels. There they transacted all their banking business, issuing drafts on New York, San Francisco and various other places’. 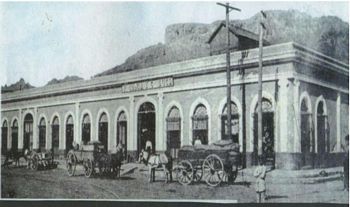 Cosca, Garcia y Cia was established in 1883 by the Spaniards Pedro Coscafrom Balmaceda, in Vizcaya and José G. GarcíaThe Mexican, Juan Nepomuceno Bringas, joined them in 1890. It had spacious premises on avenida VIII and offered domestic and imported goods for wholesale, embracing everything in the line of merchandise. "A general banking business is transacted, drafts and exchanges being issued on New York, San Francisco, Spain and all parts of Mexico: collections also being made"Federico García y Alva, Album-Directorio del Estado de Sonora, Mexico, 1905-1907.