To put this whole exercise in perspective, I have compiled a chart that summarizes the conclusions I reached in regard to identifying the seals used in printing the fractional notes. I wanted to make clear the assumptions I made along the way, while also displaying the patterns that emerged and guided how I filled in the blanks. I always opted for the simplest explanation I could find. The seals are not only numbered, but were colour coded so that patterns and repetitions emerged. 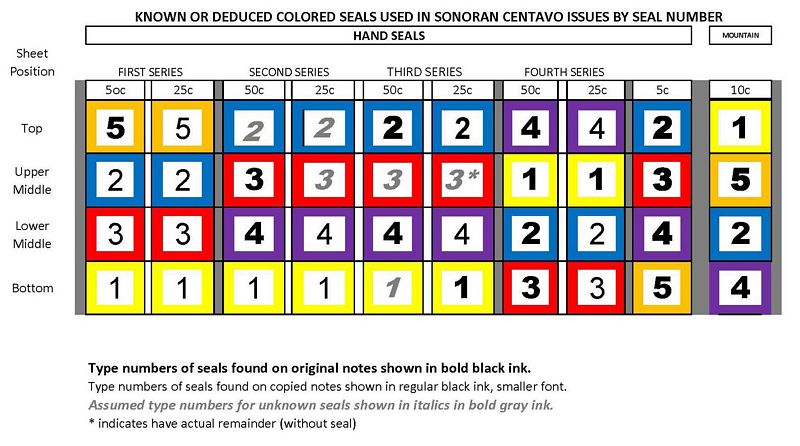 After performing the above analysis of the centavos, I am now in a position to combine the centavos and pesos data to see the whole story. There is a clear chronology, although undated as far as I know, where the plate positions for the large, coloured, mountain seals and hand seals shifted print positions on Sonoran revenue stamps. I have identified five separate periods of revenue stamp production. In each period, the hand seals and mountain seals maintained one order, beginning with the order 12345 that I have used to identify them in my analysis of the contemporary currency. For some reason, the order of the mountain seals changed after each interruption. A better question is why the order of the hand seals remained constant, and I have to assume that their print blocks were designed only to fit the stamp printing mechanism in one specific configuration.

The logical explanation for the interruptions is that the seals were needed for the four separate episodes of currency production. The back-and-forth fits neatly, and comports with the printing consignment dates that are known for the currency. By the same token, every return to revenue stamp production meant starting afresh in mounting the seals on the currency. While the consignment data provides valuable knowledge of the delivery dates of completed currency, the shifting seals provide insights into the actual production schedule.

Prior to the first usage of the seals for currency printing, revenue stamp production thrived, with eight issues totalling 33 different stamps, along with a Sinaloa essay of another ten. Production was interrupted by the need for currency use at the beginning of a new issue, just after the entire run of the first value in that issue (one centavo) was completed. As mentioned above, the mountain seals order was 12345 in this first usage.

The return to the second period of revenue stamp production is evidenced by a change in the mountain seal order to 14253. This session was interrupted by the second usage for currency needs before the print run for the next value in the issue (two centavos) was even finished. A new mountain seal order ( 53124) surfaces in the third stamp production period, beginning with the rest of the curtailed two centavo value and the final two values in that issue, along with two other issues for a total of 19 different stamps before the third usage for currency. The mountain seals were once again made available, in a new order (24315), for the fourth stamp printing usage - the two largest values (50 pesos and 100 pesos) - before returning to currency usage for the fourth and last time. The fifth period of revenue stamps was the swan song for the Sonoran mountain seals, with the final order of 45312. However, they did, ultimately, make their way into a postal essay for use in Sinaloa, and not without a parting shot, a new mountain seal order of 35142.

The currency printing hypothesis presented herein, arranged in an order conforming to known consignment dates, apparently dovetails with the most likely progression of revenue stamps production. This is especially gratifying and is certainly a welcome surprise. It is satisfying to have graduated from having too few pieces of the jigsaw puzzle to make out the final image to producing a working model that would provide a complete picture.

I hope that my working hypothesis will prove useful to collectors of this issue.