Huerta’s rule was never really effective in Sonora. From the middle of 1913 Obregón was master of all of the state, except GuaymasParadoxically, Guaymas had been against Díaz. When Madero visited Sonora on his political campaign, the merchants of Guaymas gave him an enthusiastic reception. One wealthy hacendado, José María Maytorena, became president of the Club Maderista, while Carlos Randall became tesorero. where General Pedro Ojeda was besieged, with four thousand men of the División de YaquiThe title ‘División del Yaqui’ dates from 1 April 1913 when, by presidential decree, Huerta reorganised the military structure in the country and the Primera Zona Militar became the División del Yaqui, with its General en Jefe de Brigada, Pedro Ojeda, having his headquarters in Hermosillo. The Yaqui Indians in Sonora were generally strong adherents of Maytorena. "Yaqui Indians deported to Yucatan several years ago by order of Porfirio Díaz, when he was president of Mexico, and brought back to the vicinity of Guaymas a few months ago, have been forcibly drafted into the federal garrison. These have been deserting whenever the opportunity offered" (El Paso Morning Times, 4 July 1914), fourteen pieces of artillery and four machine-guns.

During this siege Huerta’s central government was unpunctual in paying the salaries and expenses of the División del Yaqui whilst the military high command exhausted its credit with the banks and commercial houses. Because of the impact on revenues the authorities resorted on 5 June 1913 to a tax on gabanzo production and on 9 December 1913 to a 5% emergency tax on properties and businesses. On 12 December the Sonoran governor, Francisco H. García, wrote to the Secretaría de Hacienda y Crédito Público and the Secretaría de Guerra that the absolute lack of money in Guaymas to pay the troops threatened dire consequences. He had managed to obtain $50,000 from businesses but asked to be allowed to use the funds in the Customs and other officesAGN, colección Manuel González Ramírez 93/37.

However the Federal government disallowed the emergency tax so when General Joaquin Téllez took over in March 1914 he authorized an issue of vales of the Tesorería General de la Federación[text neededIn 1929 the U. S. State Department, on behalf of the General and Special Claims Commissions, United States and Mexico, asked the American consuls to submit details of the various paper money decrees. The American consul in Guaymas, Herbert S. Bursely, reported that “M. Orteja, one of the signers of the Guaymas March 14, 1914 money, states that this money was issued under orders from Mexico City which had, throughout the life of the Huerta Government, communication with Guaymas by water. He states that the money was printed in Mazatlán. Mr. Ortega also states that no copies of the orders for this or the April 1, 1914 Guaymas money are obtainable in Guaymas, but that they probably exist in Mexico City. The Consulate has made extensive enquiries and has been unable to obtain any copies of the orders on question” (SD papers, 812.515/356).], which, he said, “if it is a tax it is very fair because it falls on all inhabitants, benefiting all commercial transactions, which are very difficult today because of the shortage of coins” AGN, Secretaría de Gobernación, leg. Autografos de Gobernadores, Edos. Servicio Seguridad Puestos. Comunicaciones. 1913-1914, exp. núm. 220.

On 28 March 1914 the steamer ‘Bonita’, carrying 900,000 pesos with which to pay the Guaymas garrison was captured and sunk by the Constitutionalists outside the portEl Paso Morning Times, 31 March 1914. Possibly as a result of this upsetHowever, Téllez arrived in March 1914. As he had already issued notes drawn on La Tesorería de la Federación in Saltillo, his arrival might have been the trigger., three days later the Jefatura de Hacienda issued an emergency series of notes (in values of ten centavos, fifty centavos and one peso) printed by C. D. Taylor e HijoCharles Douglas Taylor was born in New York in 1866 and came to Guaymas in the 1880s. He served for several decades as U. S. Consul in Guaymas and at the end of the century founded the printing company of “C. D. Taylor e hijo” which operated until the 1930s. He died in Los Angeles on 11 April 1919 in Guaymas itself. These were to be to be paid with the scrip that the Tesorería de la Federación would shortly be putting into circulation (pagará en cheques de los que a cargo de la Tesorería de la Federación circularán próximamente). They were signed by C. Perez Ojeda as Jefe de Hacienda and Modesto Ortega as Contador and had a rubber stamp signature of Joaquin C. Téllez. 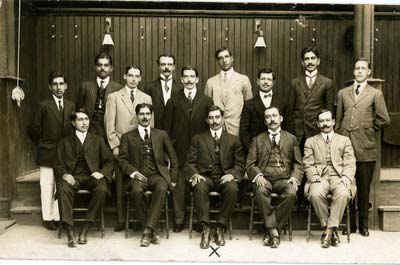 This photograph is of the División del Yaqui, with the paymaster (pagador) marked with an 'X'.

Both 50c and $1 values appear in two types; with or without a large ‘A’ in the upper centre of the underprint. The two types also use different typefaces, most noticeable in the word ‘Pagará’. 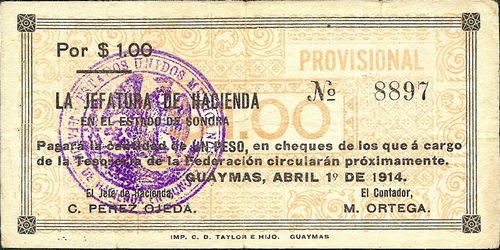 The ‘ESTADOS UNIDOS MEXICANOS - JEFATURA DE HACIENDA EN SONORA’ seal on the front of the 50c is known in two different sizes (37mm and 40mm) and in both blue and purple ink.

As for the reverse, there are two different versions of the ‘DIVISION DEL YAQUI’ seal, one with a simple and the other with a serrated edge. 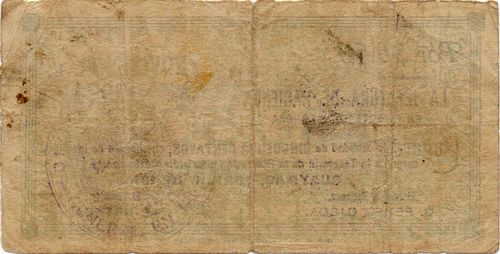 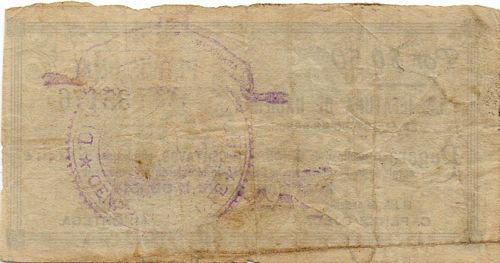 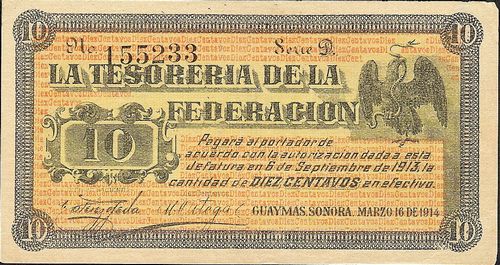 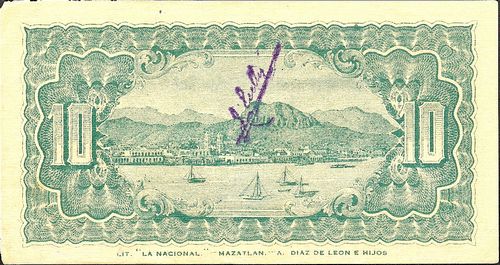 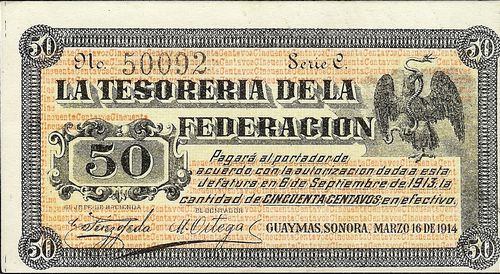 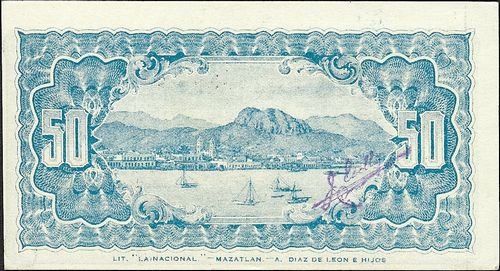 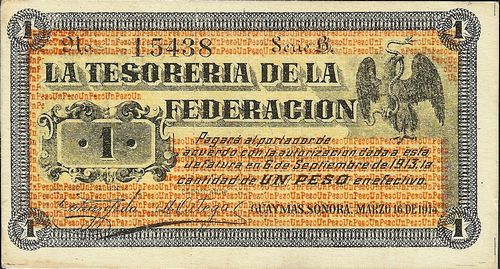 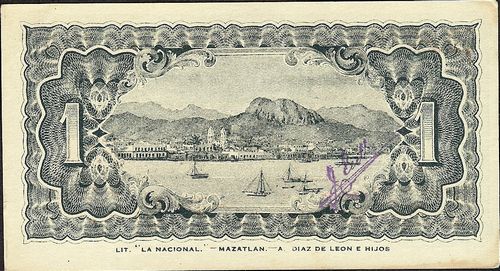 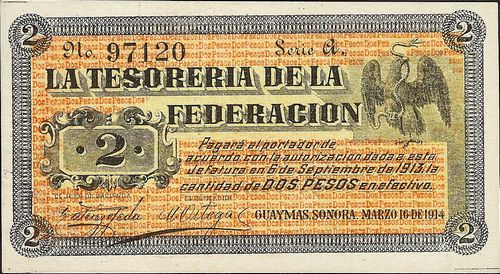 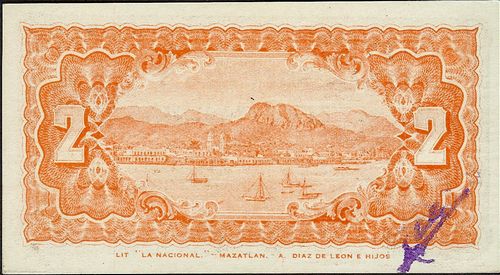 The definitive issue of the Tesorería de la Federación, printed by the ‘La Nacional’ press, owned by the firm of A. Díaz de Leon e hijo in Mazatlán, were dated 16 March but presumably issued later. They were also signed by Ojeda and Ortega.

Téllez reported that the issue was to be of $500,000 AGN, Secretaría de Gobernación, leg. Autografos de Gobernadores, Edos. Servicio Seguridad Puestos. Comunicaciones. 1913-1914, exp. núm. 220. The American consul in Mazatlán also reported that $500,000 printed there was being sent to Guaymas (SD papers, 812.515/19 telegram Alger, Mazatlán to Secretary of State 27 March 1914).These notes also carry the rubber-stamped validating signature of Joaquin C. Téllez on the reverse. The 10c is usually without the signature and a 10c with signature is rare: the other denominations are not known except with the validation. The 10c is known on board or thin card (common) and also on paper (very rare)Ken Tabachnick has pointed out that some of the 50c notes were renumbered with small thick numbers printed over the regular numbers. In each instance the second number is higher than the first..

These notes also circulated in Mazatlán, Sinaloa, as on 18 May the local paper said that as people might decline to accept them holders could also take them to Tesorería General del Estado, where they would be exchanged for banknotes or Mazatlán’s own Huertista issueEl Correo de la Tarde, Mazatlán, 18 May 1914. On 23 May it reported that the provisional Jefatura de Hacienda notes would be exchanged in the Tesorería General up to twelve noon the next day, whereupon they would be returned to Guaymas on the steamship 'Herrerías' which was sailing that dayEl Correo de la Tarde, 23 May 1914.

These notes also spread to the Federal-held sections of the Baja peninsula. On 2 June 1914 Téllez wrote to the Prefecto Político in La Paz that he had issued these vales drawn on the Tesorería de la Federación, and wanted the Prefecto Político to ensure that they circulated in his districtABCS, Hacienda, vol. 624bis, exp. 34. The next day Téllez repeated his request to the Jefe Político in La Paz who, on 5 June, transmitted it to the Subprefectos of San José del Cabo and Triunfo and the Presidentes Municipales of Todos Santos and Santiagoibid.. The Presidente Municipal of Todos Santos and Subprefectos Políticos of San José y Santiago and of El Triunfo had copies of Téllez’ decree postedibid..

On 12 June the authorities in Guaymas told the Subprefecto Político in Mulegé, Baja California, to ensure that the notes were of compulsory circulation and accepted in public officesibid..

On 15 June the Jefe Político of La Paz replied that they were already in circulation and asked for funds in the same form to cover his administrative expenses since the amount that Pagador Serrano brought was only for Tte. Coronel Gutíerrez’s columnibid..

Most, however, were used in the besieged town and the Federal soldiers there were said to be demoralised because they received their pay in a scrip that was only good in GuaymasEl Paso Morning Times, 4 July 1914.

On 11 June a Mexico City newspaper reported that the provisional issues of Guaymas and Mazatlán were being exchanged in the Jefatura de Hacienda for banknotes sent for that purpose from Mexico CityEl Imparcial, 11 June 1914 but this seems to have been little more than propaganda.

On 17 July the División de Yaqui evacuated Guaymas. Five days later it disembarked at Manzanillo, Colima. Téllez was ordered to disband the division in compliance with the negotiations between Huerta and the Constitutionalists but instead he reembarked for Salina Cruz and left his men there, heading himself for Central America.

These Federal soldiers will have taken their notes with them as it was the only currency that they had and it was not a foregone conclusion that the incoming government would disown it. Once they were demobilised they began to try and spend their notes. Hence there is an example of a 50c note with a resello from the Comisaria de Policia in Salina Cruz.

On 31 July the Interim Presidente Municipal of Guaymas, Matías F. Alsua, decreed that the Constitutionalist issues were of forced circulation. On 5 August he decreed[text needed] that, to put an end to any doubt, he was confirming that Carranza's decree núm. 21 of 28 February 1914, that declared the Constitutionalist currency to be obligatory tender, remained in forceAGHES, Fondo Oficialidad Mayor, tomo 2993. By implication he was stating that the Federal currency, if not actually illegal, was at least not obligatory.

On 14 September a correspondent from Tehauntepec, Oaxaca, reported that the ex-federal soldiers there had brought large quantities of these notes with themEl Democrata, Setember 1914.

On 5 October the Tesorero Municipal of Morelia told the Presidente Municipal that some people were accepting the notes whilst the Administración del Timbre was refusing them. He asked for advice as he did not know of any official disposition and did not want to run the risk of losing moneyAHMM, caja 29, exp. 114 letter of Norberto Páramo, Tesorero Municipal to Presidente Municipal, Morelia, 5 October 1914. After consultation, on 31 October 1914 the Prefecto of Morelia issued a circular (núm. 115) that the bonos issued by Huerta’s government were also of forced circulation. This was copied to the Tesorero Municipal on 10 NovemberAHMM, caja 29, exp. 61. On 13 November the Prefecto issued another circular (núm. 123) that the state government had stated that all notes that were of forced circulation would continue to be so until new orders. These circulars were sent to the surrounding districtsAHMM, caja 29, exp. 61. Sent to the Jefes de Tenencia in Chiquimitio, Atécuaro, Tarímbaro, Tacícuaro, Teremendo, Capula, Cuto de la Esperanza, San Nicholás, Jesús del Monte, San Miguel del Monte, Santa Maria, Charo, and Santiago Undameo, 17 November 1914.

On 15 October it was reported that certain paymasters of the Constitucionalist army paid off some of their soldiers with Guaymas notes and would be punished for fraudThe Mexican Herald, 15 October 1914. This probably refers to Guadalajara where these notes threatened to cause serious damage to business and the general public. Some people claimed that the money would be exchanged by the Secretaría de Hacienda, and on 16 October certain paymasters in the Constitutionalist army paid their troops with it, though probably not because they considered it legitimate but because they were defrauding their own men. The Subsecretario de Hacienda, José J. Reynoso, had to warn soldiers to be on their guard as these vales were null and voidBoletin Militar, 17 October 1914. On 23 October the new Secretario de Hacienda in Mexico City, in a circular giving the legal status of various currencies, proclaimed that ‘the paper money issued in Guaymas by the Federal troops during the Huerta regime lacked any value’.

The 50c is known with a poorly legible overprint ‘COMANDANCIA DE PO[LICIA ]’.