Ralph L. O’Neill: was the cousin of Ignacio MacManus and in charge of the hacienda at Bachimba in 1880Grant Shepherd, The Silver Magnet, New York, 1938. He was cashier (contador) of the Banco de Santa Eulalia from at least December 1890 until April 1892 and must have followed Ignacio MacManus to Cananea. "Mr. R. L. O’Neill, the Cashier, has had thirty years experience in banking and commercial businesses in the Southwest, upon both sides of the international line, in Arizona and Texas, and in Sonora, Chihuahua and Durango; and he is in complete and thorough touch with all the great and varied interests of all that vast region of illimitable resources, which gives the institution under his management a great advantage in dealing with men and conditions"The Oasis, 25 December 1913. In April 1910 O’Neill became president and general manager of the newly-established, American-backed Chihuahua Construction Company in Ciudad ChihuahuaEl Paso Herald, 5 April 1910, and went on to become cashier and a director of the Santa Cruz Valley Bank & Trust CompanyThe Oasis, 1 November 1913.

On 2 September 1906 this company held an extraordinary general meeting to reorganise itself with the name Compañía Bancaria Mercantil de Cananea, S.A. and increase its capital from $50,000 to $60,000The Cananea Herald, September 8, 1906. A later newspaper reportEl Paso Herald, 15 November 1911 says that the institution was established in February 1911 but presumably this refers to some later reorganisation.

Its president is Don Enrique C. Creel, the popular governor of the state of Chihuahua, recently made ambassador to the United States. Its vice president is L. Rozet, a prominent businessman of this city, and its cashier is R. L. O’Neill, a successful business man and identified for 28 years as a resident and business man in the republic of Mexico in whose upbuilding he has been a factor. Mr. O’Neill is thoroughly schooled in all branches of the banking business and has the confidence and respect of his fellow citizens. He is ably assisted by J. M. Walsh, assistant cashier.

Within a year Juan A. Creel had taken over from his brother as president, though these were honorary appointments as Enrique was a governor and Mexican ambassador and Juan was manager of the Banco Minero in Chihuahua. On 8 December 1911 J. M. Gibbs was president, Charles Everett WiswallWiswall started work with the Cananea Consolidated Copper Company in Naco, Arizona around 1901, and later became personal secretary to Greene. He married Greene's widow, Mary, in 1918 and was a most successful and respected manager of the Cananea Cattle Company enterprises. He died in Cananea in 1953 and is buried there. vice-president, R. L. Howes manager and R[amón] Armendáriz undermanager (subgerente). In 1914 F. M. Gibbs (sic) was president, C. E. Wiswall vice-president, Charles L. Montague manager, Epigmenio Ibarra, Jr.Ibarra (1880-1947) had an illustrious career: cashier, accountant subdirector and director of the Banco Mercantil de Cananea 1907-1917, manager of the Compañía Bancaria Mercantil y Agrícola de Sonora, S. A., 1917-1920, governor of Baja California del Norte 1921-1922, director of the Monte de Piedad 1922-1924, subdirector of the Comisión Monetaria 1924-25, subdirector of the Banco de México, 1925-32, treasurer of the Department of the Federal District, 1932, founder and director general of the Banco Mexicano, S. A. 1932-1947, adviser to numerous banks and insurance companies, president of the Mexican Bankers Association 1937-1938  undermanager and its capital $200,000.

Until the revolution the Cananea Consolidated Copper Company used to import between ten and fifteen thousand pesos in silver coins every month to meet its costs: after the railway bridges were burnt in March 1913 no more could be brought in and existing supplies began to dry up. By September only a few hundred pesos remained in circulation. Businesses could not make change: some wanted to close whilst other shops and cantinas issued bearer cheques for one and two pesos, drawn on the Compañía Bancaria Mercantil, though none of these survive. There was particular resentment against the small Chinese businesses that were unjustly accused of hoarding silver.

Because of the shortage of small change in Cananea the Compañía Bancaria Mercantil tried to get Mexican silver from the banks all along the border of the United States, but was unsuccessful and finally shipped in quite an amount of United States silver coins, but they were not acceptableDouglas Daily Dispatch, 23 September 1913.

To overcome the difficulties in making change and to prevent outbreaks of violence the Compañía Bancaria Mercantil decided to issue certificates of deposit. Their lawyers had advised them that as these were certificates of deposits and not promissory notes these would not contravene federal banking law and the local authorities gave their tacit approval. The certificates were valid until 1 September 1914 and theoretically could be exchanged for bank notes. The company ordered 5,000 of each of three denominations (25c, $1 and $2[image needed]) printed on the best quality paper available and stamped on the reverse with the necessary revenue stampAGHES, Fondo Oficialidad Mayor, tomo 2965.

By 22 September the company had issued ten thousand pesos’ worth of notes but on hearing that the provisional Estado de Sonora notes had arrived, Montague stopped signing them, and the company began to call them in. On 15 October the state government, which had belatedly learnt about the notes, gave the company fifteen days to redeem all of them: this period was later extended to a month and then by a further fifteen days and by 25 November almost all the notes had been redeemedAGHES, Fondo Oficialidad Mayor, tomo 2965, letter from Montague to Maytorena. However, on 27 November the Agente Fiscal in Agua Prieta sent examples of money that was circulating in Agua Prieta including
a cheque of the Compañía Bancaria de Cananea, for $2, drawn on the Bank of Bisbee and a time-limited deposit receipt (recibo de depósito a plazo fijo) of the Compañía Bancaria de Cananea, for $2. He added that he had seen notes of lower values of the Compañía BancariaAGHES, Fondo Oficialidad Mayor, tomo 2971 letter Randall, Tesorero General, to Secretario de Gobierno, 9 December 1913.

The twenty-five centavos note had a spelling error (VEINTECINCO) that was corrected on later notes.

The notes were reported to have been extensively counterfeitedDouglas Daily Dispatch, 23 September 1913.

However, as it was still impossible to obtain small coins, the company was allowed to redeem sums of less than five pesos with printed cheques drawn on the Banks of Douglas and BisbeeAGHES, Fondo Oficialidad Mayor, tomo 2965, telegrams from Isidro Fabela, Oficial Mayor Auxiliar (por orden del Sr. Secretario) to company and Prefecto Distrito, 23 October 1913. The Bank of Bisbee was started by the Canadian James. S. Douglas and Irishman William Henry (Billy) Brophy.
Brophy was born in Ireland in 1863. His parents died young and he was raised by his grandmother. He left school after the eighth grade and at age nineteen left for the United States. He arrived in Arizona in 1881 where he joined his brother Jim at a ranch in the Sulphur Springs Valley. He then went to Bisbee where he met Dr. James Douglas, who, as a consultant to Phelps. Dodge, had suggested making its first investment in mining by acquiring the mine at Bisbee and forming the Copper Queen Consolidated Mining Company: Douglas needed someone to run a ‘modest little commissary’ for the mining operation, and gave the job to Brophy. This commissary, the Copper Queen Store, started assuming many banking duties, far before the bank was formed. Brophy eventually became the manager of the Copper Queen Consolidated Mercantile Company and, in 1912, became general manager of the Phelps-Dodge Mercantile Company. He acquired banking and land interests around Phoenix and in Southern California. In 1917, he resigned as general manager of the Mercantile Company and went to France to serve with the Red Cross, where he was in charge of the European Red Cross supplies section. He died in 1922 while on a fishing expedition near Guaymas.
In 1900 Brophy, James S. Douglas (Dr. Douglas’ son), and M. J. Cunningham founded the Bank of Bisbee. In 1902, the three men plus Charles O. Ellis, opened a semi-branch bank called the Bank of Douglas in that new town: Brophy was president, Douglas vice-president and Ellis cashier and manager.
James Douglas senior was made president of the Copper Queen Consolidated Mining Company when Phelps, Dodge acquired the mine in 1885 and later served as president of Phelps, Dodge from 1908 till 1916. Notes for 25c, 50c, $1 and $2 drawn on the Bank of Bisbee, dated 27 October 1913 and signed by Charles L. Montague, are known. 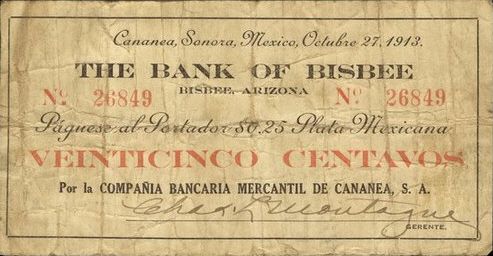 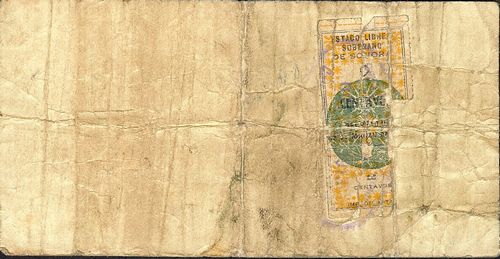 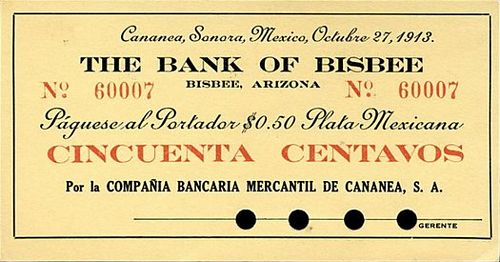 The bank was rather unfortunate during the revolution.

In late 1915 Francisco Villa sent an advance guard of 150 under a Colonel Beltrán to occupy Cananea, then followed with several thousand troops. He initially demanded $25,000, wagonloads of flour, several hundred horses, and 1,500 head of cattle. Forty soldiers under General José Rodríguez broke into the Banco Mercantil and forced the general manager to open the safe at gunpoint. In all, they took 50,000 silver pesos from the bank and 43,000 silver pesos from the company[ ] A variant is that Villa forces looted $39,004.34 from the Mercantile Banking Company (CCCC papers, MS 1032, section 2, folder 72). They also looted local stores, took livestock valued at 138,909.54 silver pesos, raped several women, kidnapped two surgeons, and killed a U.S. engineer. Villa departed from Cananea on 20 November 1915, two days before Constitutionalist forces under General Obregón arrived.

On 9 May 1919 a band led by Rafael Caballero robbed the bank. At about 1.30 a.m., 20 men broke into the Cananea jail, shot Señor Rivera, the chief of police, and four officers, and freed the prisoners. They proceeded to the home of the bank's cashier, José María Aldama, forced him to open the bank's vault, and walked away with $47,500 in gold and silver coin. As a crowd of townspeople gathered around them, the robbers shouted, "the money belongs to the people," and threw handfuls of gold coins into the crowd. The bank robbers next helped themselves to clothing, food, and horses before departing the town "in a leisurely way" around daybreak. Management concluded that these were local men, for two reasons: they arrived on foot, and they left behind hats bearing the trademark of a local storeTucson Daily Citizen, 9 May 1919: CCCC papers, MS 1032, box 2 Young, Cananea, to Haff; Mexico City, 23 May 1919.

Managers were concerned that the robbery might be the sign of a growing radicalism among locals. "Radical Bolsheviki speeches" made during the recent political campaign called for the socialization of private property and the looting of the bank, and such statements may have encouraged the break-ins and influenced public reaction to the robberies. The most tangible evidence of motive, however, was a note left by the thieves, stating, "for the support of the cause of Beltrán" - the Villista colonel who had robbed the bank some years earlier. Company officials believed that some of the same men had been involved this time. They did not think, however, that the robbers were Villistas or Beltranistas, because neither faction had been heard from in the region for some time. The reference to Beltrán, however, prompted the Constitutionalist government to dispatch three hundred troops to Cananea to catch the thieves.

The robbers had fled in different directions. Caballero was robbed during the night by one of his accomplices and, lacking money, sought work on a ranch where he was recognized. Caballero and an associate were handed over to the police and hanged from the Puente del Arco in Cananea. Most of the bandits, however, as well as the loot, remained at large when the troops departed. Fifty soldiers stayed behind as a temporary garrison, which management hoped would become permanentCCCC papers, 1919 Documental 0127 General - Superintendent, Cananea, to Ricketts, New York City, 12 May 1919: AGHES, tomo 3326, letter R. R. González, Cananea, to Governor General Miguel Piña, 14 May 1919; letter, Diego Fernández, México, to Piña, 13 May 1914 and reply, 14 May 1919. On 15 May the band, under the command of José María Suárez, was reported to be heading eastward to Colonia Moreles, 56 miles southeast of Douglas, and trying to meet up with Villista bands operating in the western part of ChihuahuaTucson Daily Citizen, 15 May 1919.

The Compañía Bancaria Mercantil de Cananea building burnt down in 1926.