Other emergency issues in Sonora in 1913 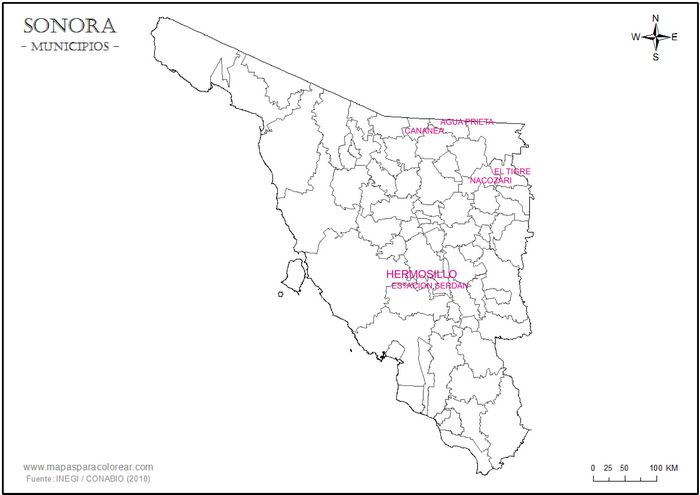 As stated, the outbreak of the revolution led to the hoarding of silver coins and banknotes and the consequent shortage of currency had serious effects on everyday life. The revolutionary government attempted to remedy the situation with its own Estado de Sonora notes but in the meantime various local issues were made.

By September 1913  it was reported that as only a few hundred pesos remained in circulation in Cananea. businesses could not give change and some wanted to close. Other shops and canteens issued bearer cheques for one and two pesos redeemable on the Compañía Bancaria Mercantil, although none of them survived. Are these different from, or merely a misunderstanding of, the Banco Mercantil de Cananea issue?

On 19 November 1913 the government wrote to the Comisario de Policía in Agua Prieta that it had learnt that the Moctezuma Copper Company S. A. had issued $5,000 in $1 notes in the form of cheques drawn on the banks of Douglas[image needed], and that an unnamed individual had issued another $,1000 in notes of the same value. The same day the Comisario, Federico Meza, sent the government examples of the notes (cheks) that it had asked about. Meza said that these were not issues (emisiones de bonos) since, whenever one collected a sum of five pesos or more, the businesses that had issued these cheques would exchange them for notes of the Estado de Sonora or other banks. They merely made up for the shortage of low denomination Estado de Sonora notesAGHES, Fondo Oficialidad Mayor, tomo 2971, telegram to Comisario de Policía, Federico Meza, Agua Prieta, 19 November 1913.

The unnamed individual might have been the future president Plutarco Calles in Agua Prieta, for whom three values, for 25 centavos, 50 centavos and 1 peso, dated 10 November 1913 are known.

These notes are signed by J. Smithers, Jr. and have revenue stamps and an oval cancellation ‘Elias Fuentes & Co. Nov 11, 1913’ on the reverse.

In November 1913 various foreign businesses in Cumpas issued $1 notes, the notes being preferred to the Estado de Sonora issue.

Thus the Tigre Mining Company S.A., at El Tigre, issued a cheque for one peso drawn on the Bank of Douglas dated 11 November 1913, and signed by L. R. Budrow.

In November it was reported that the Moctezuma Copper Company had issued 5,000 cheques for one peso drawn on the Bank of Douglas[image needed]AGHES, Fondo Oficialidad Mayor, tomo 2971, telegram to Comisario de Policía, Federico Meza, Agua Prieta, 19 November 1913.

In addition, there exists bearer cheques from the Moctezuma Copper Company for 25c, $1 and $2 dated 20 December 1913 drawn on The Bank of Douglas. Obviously the company had also been told to withdraw its original notes but, like the Cananea Consolidated Copper Company, allowed to issue bearer cheques. 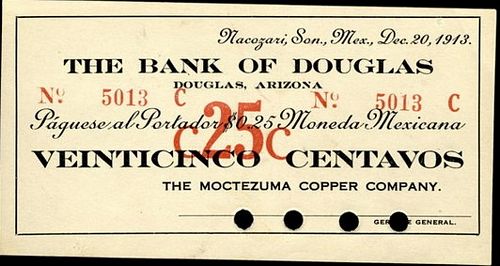 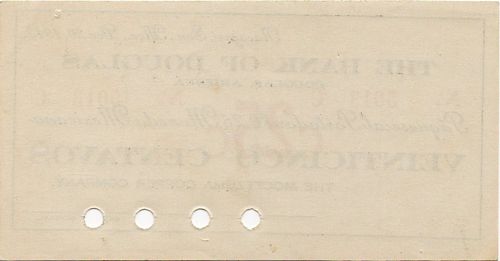 In October 1913 the shopkeepers of Ures asked their Prefecto, Jesús A. Cano, for permission to issue 600 pesos in bonds (bonos) to the values of 25c, 50c $1, $2 and $3, such notes to be signed by the businesses, stamped by the Prefectura and backed by a deposit left with the Prefecto himself. At that time any storekeeper who did not have change was forced to give out a vale that could only be used in the same store. These notes would have eased the smallest transactions for anyone who wanted to redeem a note would have been able to draw on the cash deposited with the Prefecto. The request was passed on to the state government but on 22 October the killjoy Secretary of State Juan Sánchez Azcona turned it downAGHES, Fondo Oficialidad Mayor, tomo 2971, telegram Cano, Ures, to Secretario de Estado, 18 October 1913: telegram Secretario de Estado to Cano, Ures, 22 October 1913.

Estacion Serdán is in the municipio of La Colorada. On 17 April 1914 the Comisario de Policia there, in reply to a query from the governor’s office, reported that during late November and early December 1913 two Chinese shopkeepers, José Gui Long and Juck Luey, had issued vales for 5c, 10c and 15c[images needed], because of a lack of small chargeAGHES, Fondo Oficialidad Mayor, tomo 2993.

This Secretaría has discovered that some banking institutions and certain Mexican and foreign business houses have put into circulation small-denomination bearer scrip and as this practice is prohibited by Article 37 of the Ley de Instituciones de Crédito and punished by the respective Code it is suggested that you exercise the strictest vigilance to ensure that the law is not abused, setting the thirty-first of this month as the date by which such scrip should be redeemed by its issuers and the emission amortised, with the understanding that if they fail to do so the infractors will be consigned to the appropriate authorities.

On 14 January 1914 Carranza sent a telegram to Calles at Agua Prieta that he had learnt that certain mining and banking companies, particularly from Cananea and Nacozari, were continuing to circulate low value notes (vales al portador de pequeño valor). As his circular had outlawed such vales, he ordered Calles personally to visit these places and put a stop to this practiceCEHM, Fondo MVIII, telegram Carranza to Calles, 14 January 1914. A case of poacher turning game-keeper.

On 12 February 1914 Maytorena issued his decree (núm. 40) for fractional notes of five and ten centavos. A newspaper reporting this said that all companies and individuals had been forbidden by the government to issue or circulate their script and also warned to redeem any that was outstanding under penalty of being finedTucson Daily Citizen, 18 February 1914, which suggests that some might still have been in circulation in February 1914.