On 1 February 1914 it was reported that the Cámara Nacional de Comercio de Orizaba, like other chambers, has asked the Secretaría de Hacienda for permission to issue vales, but had been refused, as such vales were expressly prohibited by lawEl Imparcial, 1 February 1914; The Mexican Herald, 19th Year, No. 6,728, 2 February 1914. The Secretaría was, therefore, being inconsistent, refusing Veracruz and Orizaba but allowing Jalapa.

However it issued a series of cheques in three values in June 1914.  These were produced by the Tipografia Libreria Escolar J. Contel, signed by J. M. Cuesta E., and redeemable in quantities of five pesos. 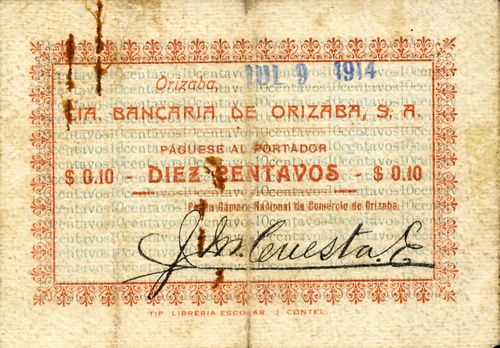 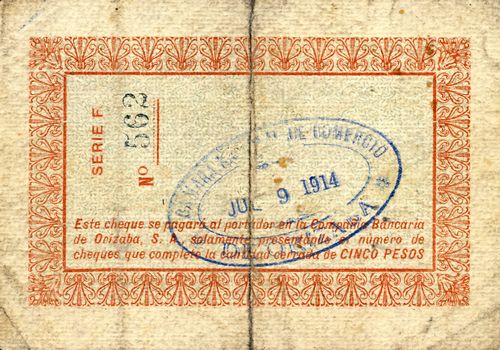 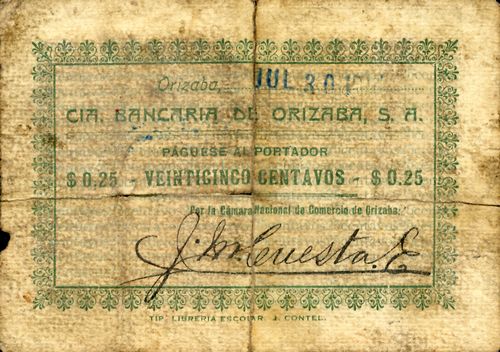 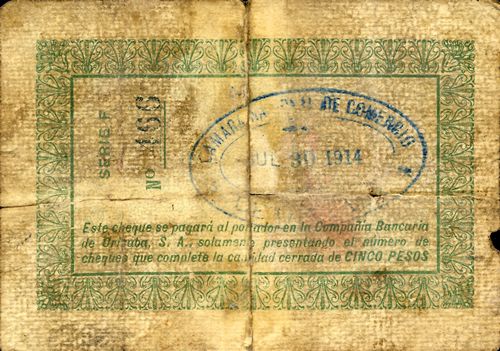 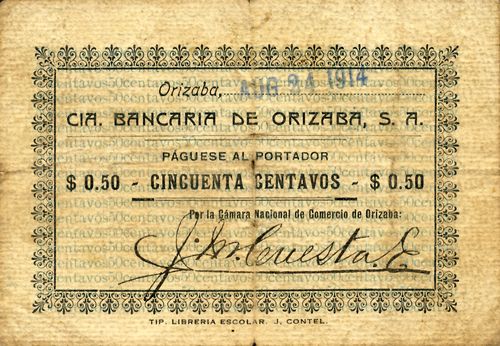 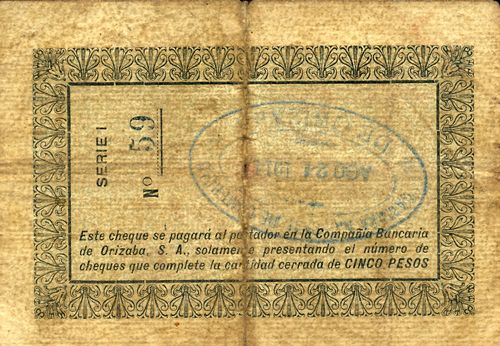 Soon after these notes were issued the Cámara held a meeting to decide whether to continue with them or to withdraw them. The mayor (alcalde), Calixto Fernández, was invited and asked to support the issue by getting public offices to accept the cheques. At a council meeting held on 1 July this request was discussed but the council decided that it could not do so, as the notes were unauthorised and accepting them could impose a personal financial risk on the Tesorero Municipal, should they ever be dishonouredAMO, Actas del Cabildo, libro 57, p186v. On 15 July Calixto Fernández informed the Cámara of the council’s decisiónAMO, Serie Gobierno, Subserie Admón civil, exp. 113.

In late June a correspondent could report that these vales had brought about a new calamity (una nueva calamidad) because the majority of businesses refused them and in other stores, belonging to members of the Chamber of Commerce, they insisted that the purchaser took the whole value of the vale in goods without offering change, meaning that people had to purchase items that they did not want. In addition, though they stated that they could be exchanged in the Compañía Bancaria de Orizaba, that only applied when a total of five pesos was presented, which meant a general lack of confidence. They should be payable ‘al portador’El Dictamen, Año XVI, Núm. 1192, 20 June 1914. However, these difficulties must have been overcome as we know of notes dated to July and August 1914.

On 16 October the Secretaría de Hacienda y Crédito Público told the governor of Veracruz to ensure that companies and individuals withdrew any issues that they had made. The Secretario General passed the instruction on to the Presidente of the Administración Civil in Orizaba who in turn passed it in to the Cámara de ComercioAMO, Serie Hacienda, Subserie Correspondencia, exp 9. We do not know if this had any consequences.

The Chamber produced another series, for the higher values of 50c and 75c, dated 23 July 1915. These were drawn on the local branch of the Banco Nacional de México and could be redeemed there in multiples of five pesos (because of the shortage of banknotes or paper money of smaller denominations). 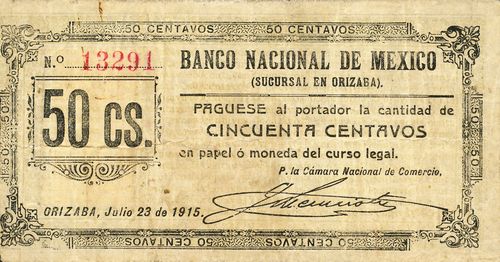 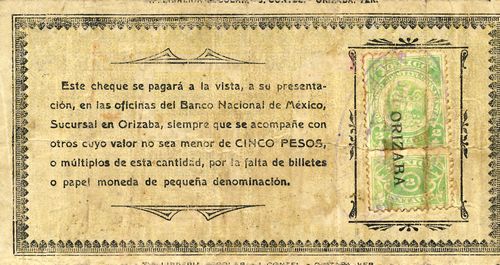 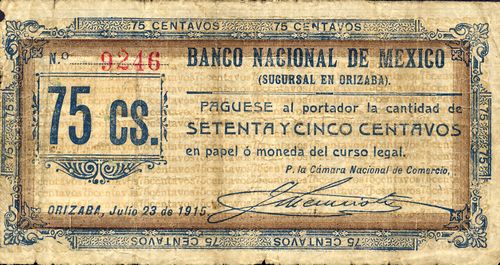 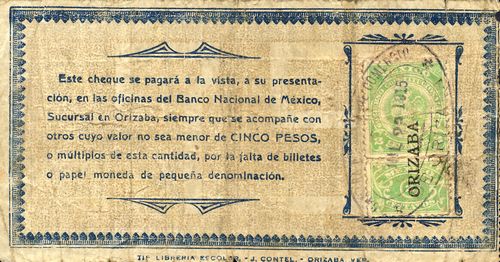 A week later, on 30 July, it was reported that the Chamber had asked the Junta de Administración Civil and the Jefe de las Armas, General Carlos Tejeda, to ask the Governor Cándido Aguilar to exempt them from the stamp duty that would be payable on a proposed issue of 5c, 10c and 20c notes (if it had to pay duty the issue would be prohibitively too expensive)La Vanguardia, Orizaba, Tomo I, Núm. 65, 30 July 1915. The governor was either unwilling or unable to accede to this request (and cartones for these values were already in circulation though highly disliked) so this issue of smaller value denominations does not seem to have been made.