On 23 February 1915 Pascual Ortiz Rubio, as representative of Carranza’s government, signed a contract with the Parsons Trading Company of 17 Battery Place, New York. The contract was for the printing of 33 million $1 and $2 notes, for a total price of $87,980 U.S. Gold F.O.B. Deliveries were to start on 16 March and be completed by 15 May, with bonuses for earlier deliveries and penalties for delays. The notes were to measure 7¼ by 3¼ inches (84 x 185mm), and be printed by offset lithography with three colours on the face and one on the back, on unwatermarked “20 lb” paper. There were to be 24 million $1 notes, numbered from 6000000 to 30000000, and 9 million $2 notes. The design was to be as per attached specimens except that the phrase “S. S. ENCARGADO DE LA SECRETARIA DE HDA. Regnoso (sic)” was to be replacedABarragán, caja IV, exp. 24, f. 65. The original contract gave the new wording as “POR EL DPTO. DE HDA. EL SS NIETO“ but this was changed, in a modification dated 30 March, to “P.O. DEL SRIO. EL S. S. NIETO”.

Strangely, the contract does not specify changing the location from MEXICO (as on Title A notes) to VERACRUZ, but some later correspondence must have agreed on the date (FEBRERO 5 DE 1915) to print on the notes and this change will have be noted then.

These Parsons notes also have the denominations in a different style to that used on the other Veracruz issues, the $1 being the same as the Mexico city $1 issues.

In a telegram from General Alvaro Obregón to Juan Barragán Rodríguez in Mexico City, dated 5 March, Obregón had complained that he was not receiving enough currency. In response Barragán Rodríguez says that the Finance Secretary, Alberto Pani, was unable to print enough money to satisfy the demands of different commanders all over Mexico. They had had to contract the printing of notes in the United States; but it would take three weeks for them to start arrivingAbarragán, caja III, exp. 2, f. 8.

In a report from Ortiz Rubio to Carranza, dated 16 April, Ortiz Rubio says Luis Cabrera had sent him to Eliseo Arredondo, the Constitutionalist agent, in Washington, from where he had gone on to New York, as it had firms better suited for the printing he required. He was directed to three companies, the American Bank Note Company, New York Bank Note Company and Hamilton Bank Note Company. The first said that they could not use the steel plates that Rubio Ortiz had, because their presses (tórculos) were smaller and none of their notes were of such a size, so they would have to make new plates, following the general guidelines. This would take a month. However, their costs and speed of delivery were also unacceptable. Hamilton’s terms were even worse, while the New York Bank Note Company most closely met Cabrera’s conditions. Meanwhile, Cabrera had told Rubio Ortiz to talk to the three major paper suppliers, the National Paper Company, Crane and Parsons. Only the last could provide enough paper for 700,000 notes a day. Besides, whilst the printing companies were better for steel engraving, Parsons could get the American Lithographic Company to produce plates for offset printing. So Parsons got the contractAIF, RM/III 4-039, Correspondencia relativa a emisión y asuntos de monedas y billetes.

These Parsons notes can be distinguished by the heavier delineation, for example, within the volcano Ixtaccíhuatl. 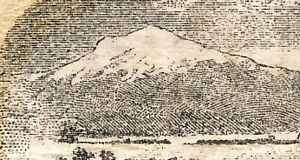 Some $1 notes have a suffix U and are from different plates. These have low serial numbers but their range overlaps that of Parsons notes, so they were not a first run from Parsons, but an entirely different printing.

The numbers for the $2 notes range from 277070 to 16330043. However, three of the four lowest numbers (below 300000) are stamped FALSO and are undoubtedly counterfeit. A contemporary notice said that counterfeit $2 had a point on the tip of Patria’s nose.

The surviving consignment notes suggest that the nine million $2 notes in the contract numbered from 1000001 to 10000000. Ignoring the counterfeits mentioned above, known numbering for the $2 notes range from 356783 to 16330043 so again this is far beyond the range of the contract. However, the higher number notes (above 9154531) are of a crisp, bright printing, have crimson numbering and so could be a later print run.

On 15 June 1915 the government in Puebla put out a notice informing business that these $1 and $2 notes with a different design for the denomination were nevertheless genuinePeriódico Oficial, Puebla, Tomo XCVI, Núm. 17, 15 June 1915.