The henequén plantations of Yucatan were notorious for the mistreatment of their workers, including the use of debt peonage and payments with private monedas de necesidad. These vales were issued in monetary units (e.g. 1 or ½ real), for certain amount of work, or for measures of maize, e.g. in almuds, but most will have been in metal tokens, rather than paper.

She distinguishes these from the vales mercantiles, akin to banknotes and professionally printed in the United States. These are high value notes issued by prominent businesses in the 1880s to compensate for the lack of banknotes. At present we seem only to have remainders of the latter.

Since about 1874 various respectable business houses (casas de comercio) in Mérida issued notes (vales al portador) to facilitate commercial transactions. As the amount put into circulation by each casa did not exceed 25% of its share capital, and they did not acts as banks, the notes were well acceptedEl Monitor Republicano, 25 May 1889.

The establishment of a branch of the Banco Nacional Mexicano in Mérida in November 1882 (taken over by the Banco Nacional in Mérida in 1884) reduced the need for these notes, and in 1884 article 979 of the Code of Commerce (Código de Comercio) prohibited such notes (vales, pagarés, ni cualesquiera otros documentos que contengan una promesa de pago en efectivo, al portador y a la vista, ya sea en la forma de billetes, de recibos de depósito o cualquiera otra) and set a fine of 10% of the value of such notes for any infraction.

In the early 1880s the Eco del Comercio published a series of articles questioning the validity of these issuesEl Eco de Comercio, Mérida, 27 April 1889.

It was not until five years later, in April 1889, that the Ministro de Hacienda took actionLa Patria de México, Año XIII, Núm. 3659,26 April 1889: El Siglo Diez y Nueve, 26 April 1889; La Voz de México, Tomo XX, Núm. 95, 27 April 1889.It fined various housesEulogio Duarte, E. Escalante Bates, O. Molina & Compañia, M. Dondé & Compañia, José M. Perez & Compañia, Palma & Hermanos Sucesores, Pablo Gonzalez, Regil y Vales, L. Gutierrez Sucesores, Viuda de Toledo & Compañia, Amado Canton Frexas, Enrique Hübbe y Eusebio Villamil, Viuda de Ortiz & Compañia, and A.and D. Duarte Zavalegui up to $25,000, giving them the right, if they did not pay, to appeal to the District Judge. Instead the houses complained to the Ministry, arguing, inter alia, that the numbers were wrong and that one house that had issued $200 in vales had been fined $5,000 (the law stated that they should be fined a tenth of the value of the notes actually placed in circulation) and that they should not be fined retroactively for vales issued before the Código de ComercioDiario del Hogar, Año VIII, Núm. 216, 28 May 1889; Revista de Mérida, [            ] 1889. . It was also for the courts, rather than the Jefatura de Hacienda, to impose fines. The Jefatura made up a file (expediente) for each, attaching a single example of the vale al portador that the casa had issuedEl Monitor Republicano, 25 May 1889.

On 29 May fire destroyed five magnificent buildings in the old Almeda - warehouses and depositaries containing goods valued at more than a million pesos, belonging to Messrs. Ponce, Palma, Molina, Gutiérrez and Cámara. It was suggested that President Porfirio Díaz could make a magnanimous gesture and let the businesses off their finesEl Siglo Diez y Nueve, 30 May 1889: Diario del Hogar, 1 June 1889.

On 28 July it was reported that one of the houses (casas banqueras) which had issued vales had closed, to the detriment of the holders of notes. In order to retain public confidence in the other houses, they had jointly redeemed the company’s notesEl Nacional, 28 July 1889.

The government set 30 September 1889 as the date by which the notes should be withdrawn and the holders paid. The ultimate withdrawal of these notes was a driving force for the same casas comerciales to organise the Banco Mercantil de Yucatán and the Banco Yucateco.

Barceló Quintal mentions the commission merchants Regil y Vales as an issuer of vales al portador and they were one of the houses fined in 1889Diario del Hogar, Año VIII, Núm. 216, 28 May 1889.

Barceló Quintal mentions E. Hübbe y Cía. as an issuer of vales al portador and Enrique Hübbe y Eusebio Villamil was mentioned as one of the houses fined in 1889Diario del Hogar, Año VIII, Núm. 216, 28 May 1889.

Barceló Quintal mentions Palma y Sucs. as an issuer of vales al portador, whilst Palma & Hermanos Sucesores was mentioned as one of the houses fined in 1889Diario del Hogar, Año VIII, Núm. 216, 28 May 1889.

A. and D. Duarte Zavalegui

During August 1889 the company published a notice that, as the government had set a timelimit of 30 September for its vales to be withdrawn, after that date they would be the responsibility of the holderLa Razón del Pueblo, Cuatra Época, Año IV, Num 413, 19 August 1889 and five subsequent issues.

According to an advertisement L. Gutíerrez was a hardware and haberdashery (ferretería y mercería) established in 1860, the oldest establishment of its type in the state and located at 1a. Regil Estrada and 2a de los Rosados.

Barceló Quintal mentions Donde Cámara as an issuer of vales al portador and M. Dondé & Compañia was mentioned as one of the houses fined in 1889Diario del Hogar, Año VIII, Núm. 216, 28 May 1889.

Manuel Dondé Cámara was from the 1860s a prominent importer and exporter and controlled one of the most important henequen casas comerciales in Yucatan. Until 1887 he was associated with Eusebio Escalante Bates in the Agencia Comercial, in charge of exporting Yucatecan products, mainly henequen, and importing heavy equipment for hacendados. From 1893 to 1904 he ran M. Donde y Cía, dedicated exclusively to henequén exports, and from 1904 he established with Pedro Peón Contreras an important port service. He served as interim governor of the state in 1891.

Barceló Quintal mentions Eulogio Duarte Troncoso as an issuer of vales al portador whilst Eulogio Duarte was mentioned as one of the houses fined in 1889Diario del Hogar, Año VIII, Núm. 216, 28 May 1889.

The vignette on the $20 note was entitled "Express wagon".

This was a commission merchant.

Barceló Quintal mentions the Casa Escalante as an issuer of vales al portador whilst E. Escalante Bates was mentioned as one of the houses fined in 1889Diario del Hogar, Año VIII, Núm. 216, 28 May 1889.

Eusebio Escalante Bates was one of the first to promote the production and commercialization of henequen on a large scale. From the 1860s he headed different henequen casas comerciales houses, and from 1890 became one of the main hoarders of henequen in Yucatan. He dedicated himself to the importation of machinery for the industrialization of henequen, which he sold on credit to the hacendados. His banking and exchange business reached respectable sums, taking advantage of the funds he managed in the export of henequen. Among his properties was an important henequen and sugar plantation. Until 1897 he served as the main partner in the agro-industrial company "El Cuyo y Anexas, S. A.". In partnership with Manuel Dondé he founded the Compañía de Tranvías de Mérida, and with Joaquín A. Peón, Nicanor Ancona and others, he ran a steamship line.

We have a $50 note printed by the American Bank Note Company. 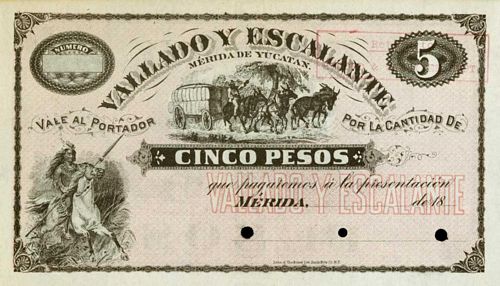 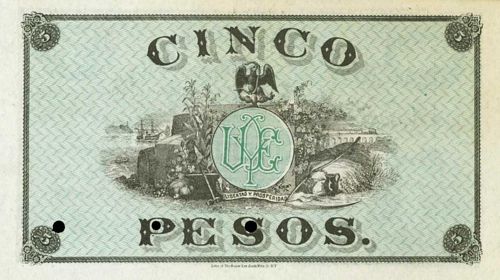 Olegario Molina Solis was born in Bolonchenticul, in present-day Campeche in 1843, the son of a small farmer and businessman. He moved with his family to Yucatán's capital, Mérida, in 1857, after the Caste War of Yucatán ravaged his family's properties. After securing degrees in law and topographical engineering, Molina served as secretary to Liberal General Manuel Cepeda Peraza, who defeated Emperor Maximilian's forces in the peninsula in 1867. During the 1870s Molina became an engineer, superintendent, and later a partner in the first railroad built in Yucatán, the Mérida—Progreso railway, which he helped complete.became the owner of six henequen plantations, and one of the wealthiest families in the state. In 1881 he founded the casa comercial O. Molina y Cía. with his son-in-law Avelino Montes, to export henequén. It is believed that Molina and Montes, worked to depress fibre prices to benefit their North American partners, the International Harvester Company (and themselves). They used their dominant position in the fibre trade to expand the investment base of their company dramatically. Ventures in real estate, import/exports, and speculation in local industry, commerce, and infrastructure made Molina and Montes, and their extended network of family and friends, an economic octopus in turn-of-the-century Yucatán.

At the end of 1907 Molina deployed all his forces to destroy the group headed by the Escalentes and gain total control of henequén production and the Ferrocarriles Unidos driving the Escalente companies into bankruptcy and accusing them of fraud.

Molina was a federal deputy from 1869 to 1871 and 1873 to 1875, senator from Oaxaca from 1900 and 1902, and governor of Yucatán for two terms, from 1 February 1902 to 6 March 1907. As governor he is remembered for the number of schools he built, the paving and draining of Mérida's streets, and a spate of capital improvement projects in Mérida (O. Molina y Compañía received lucrative contracts for many of these capital projects.) He also reorganized the property registry, rewrote the state constitution, reformed the penal and civil codes, and reorganized the state National Guard and Mérida police force.

In 1906 President Porfirio Díaz visited Mérida, and after marveling at all of the impressive physical changes, rewarded Molina by making him, in Match 1907, his Secretario de Fomento, Colonización e Industria. He fled to Havana in 1911 and died in exile on 28 April 1925. 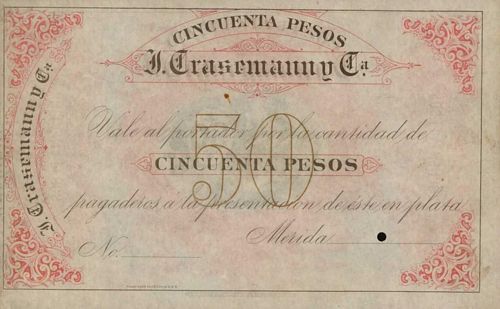 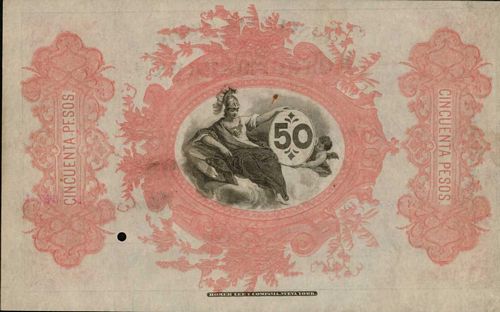 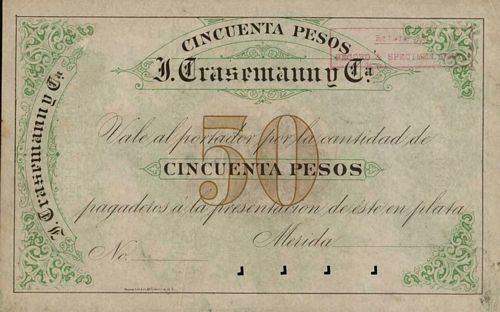 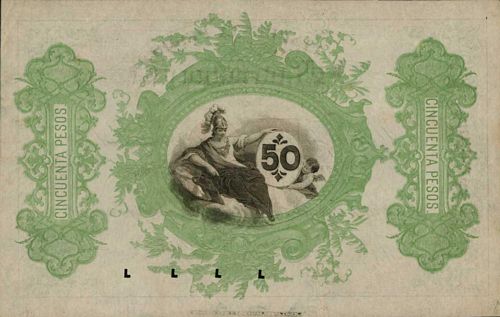 Johannes Carl Heinrich Crasemann was born in Hamburg in 1839, the descendent of an entrepreneur clan and nephew of the founders of the Hamburg-Vera Cruz-Packetgesellschaft, one of the first shipping lines that connected those two international ports. In 1858 Johannes Crasemann began to work in Mexico City as an employee in Stürken and Pollitz, a wholesale business with nationwide distribution that imported, among others, food, minerals and textiles. Starting as one of several accountants, in three years he became responsible for that department. In 1864 he was able to start the firm Moritz & Crasemann, a small company selling textiles in Mexico’s capital, which due to the French competition had to be liquidated in 1868. He moved to Yucatán and in April opened the Mercería y Ferretería J. Crasemann. From a small but central rented location the business served the whole peninsula. Via Hamburg-Veracruz-Mérida, it imported food items, construction materials, machinery, musical instruments, arms, home appliances, furniture, etc. As exports, it concentrated on dyeing-wood and henequen. The company also offered its services as insurance agent and shipping specialist, and functioned as an informal bank –it was partly thanks to those lending money activities that the firm was able to accumulate capital swiftly and to acquire valuable real estate in default. By 1875 the firm’s name would included “El Candado”, that is “The Padlock”, the name by which it is recalled until the present. By 1878 the business J. Crasemann, El Candado was doing so well that it moved into what became its permanent location on the corner of calle 60 with calle 65. Hanging from its entrance, a large padlock unified visually the corporate identity of the company. Almost at the same time, Crasemann moved to a beautiful villa, known as La casa de los alemanes. Prosperous and apparently satisfied, Johannes Crasemann decided to return to his family in Hamburg at the beginning of 1883, after having worked in México a quarter of a century. The then 43-year-old transferred his firm to Otto Rosenkranz, another businessman from Hamburg. He died in September 1900 Alma Durán-Merk, A Case Study in Enterpreneurship: The Hanseatic Merchant Johannes Crasemann in México, Mesoamerikanisten-Tagung, Hamburg, 16 January 2015 in OPUS Universität Augsburg.

We know of specimen for a $50 note printed by the Homer Lee Bank Note Company of New York in both pink and green.