$1 notes of the Banco de Zacatecas

In 1914 the Banco de Zacatecas continued to operate in the state as well as in its branch offices in Lagos de Moreno, Jalisco and the city of Aguascalientes. Nonetheless, the members of the board of directors and the bank manager had moved to Mexico City in December of the previous year for security reasons.

Toward the end of May, Sr. Enrique Velasco, the bank accountant, came to Mexico City to inform the Board of the situation in Zacatecas, of the imminent attack by the revolutionary forces and, consequently, the possible danger to the employees and the interests of the bank. If the garrison was unable to resist the rebel forces the capture of the plaza would be fatal. On 2 June the Board unanimously agreed to close the main office temporarily and transport the portfolio, documents and accounting books to Mexico City. At the same time, a provisional office would be opened in Mexico City. It was also agreed to close the branch offices at Lagos de Moreno and Aguascalientes, and notify immediately the Ministry of the Treasury AGN, f Antiguos Bancos de Emisión, Zacatecas: Libro de Actas, fjs, 13r-13v .

The Board met again on the morning of 23 June when the hostilities for the capture of Zacatecas were beginning between the forces of Villa’s 'Dorados’ and the Federal Army. It was informed at that meeting that provisional offices had been opened at numbers 8 and 10 in the building of the Banco de Londres y México (at the corner of Bolivar and 16 de Septiembre) The main office and the branch offices were housed in these offices with the necessary personnel as well as the papers, documents and accounting books AGN, f Antiguos Bancos de Emisión, Zacatecas: Libro de Actas, fjs: 14r-14v. 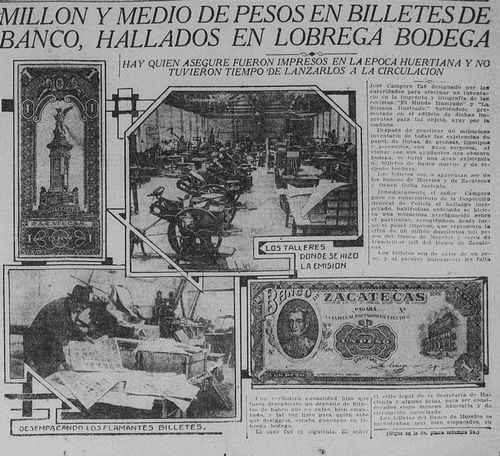 On 9 October the bank manager, Flavio Macias, informed the board that the Constitutionalist military authorities in Mexico City, had confiscated the Eduardo Aguilar lithographic printshop. This was where the 150,000 one peso notes of the Bank of Zacatecas had been ordered: the unfinished notes were found lacking the stamp, the controller s signature, and the legal requisitioning by the corresponding office of the Ministry of the Treasury. This unexpected event would delay the delivery so the Board decided not to release these notes to circulation. Nonetheless, they would do all in their power to assure their recovery AGN, f Antiguos Bancos de Emisión, Zacatecas: Libro de Actas, fjs, 17r-17v .

Two months later, on the morning of 9 December Sr. Macías informed the Board that Eduardo Aguilar had notified them that the notes that the bank had ordered had been recovered. Also, the printer requested that this order of notes be paid, one way or another, despite the fact that it had not been finished. The Board appointed a commission of three: Cayetano Arteaga, Edmundo von Gehren and Flavio Macías to terminate this matter as soon as possible AGN, f Antiguos Bancos de Emisión, Zacatecas: Libro de Actas, fjs, 18v-19r.

On 18 December the Board was notified that after their meeting with Sr. Aguilar, the latter had offered a reduced amount of 465 pesos as a total settlement for printing the notes. It was decided that the commission contact the printer again in order that the matter be terminated with a more favourable arrangement for the bankAGN, f Antiguos Bancos de Emisión, Zacatecas: Libro de Actas, fjs: 19r-19v-20r.

On 3 February 1915, at another Board meeting, manager Flavio Macías informed that they had reached an agreement with Sr. Aguilar whereby the Bank paid $734.92 and Eduardo Aguilar delivered a box with the unfinished notes, as well as the corresponding front and back plates. It was agreed that both the unfinished notes and the plates should be destroyed AGN, f Antiguos Bancos de Emisión, Zacatecas: Libro de Actas, fj, 21r .

The lithographic plates for the face and reverse are held by Mexican collectors. 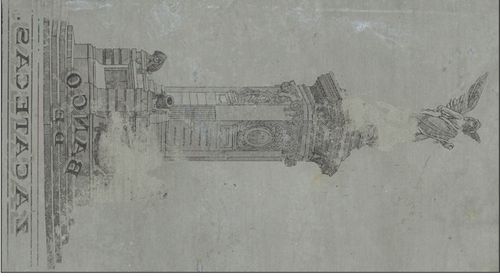 The plate has the engraved signatures of Cayetano Arteaga as Consejero and Enrique Reyes as Cajero.

Bank records state that all the finished notes were incinerated, so the image in the El Liberal article could be a photo from the lithographic plate. However, Dr. Luis Gómez Wulschner has superimposed a flipped image from the plate

over the background colour proof

to show what the finished note will have looked like.

(based on “Design of the One Peso 1914 Bank of Zacatecas Note, unknown until now. Centennial Discovery!” by Dr Luis M. Gómez Wulschner with additional information from the same author)